Before describing specific class observations, I would like to comment on a few general trends that I found fairly surprising. First, more people outwardly appeared to be “doing nothing” than I would have thought. By “doing nothing” I mean that a number of people took their seats, pulled out their notebooks, and simply stared straight ahead or down at a blank sheet of paper.

In general I can divide the majority of people observed into three groups- these people who had nothing in front of them (nor were they interacting with anyone), people engaged with their smart phones, and students with laptops out (both of which were doing a diverse numbers of things on said devices). For the following specific observations I looked at three distinct classes and one specific student within each class: a Thursday 1:30 PM “Social Networks” precept with junior “Dan,” my Imagined Languages class on Wednesday at 1:30 PM with junior “Nikitas”, and COS 340 on Wednesday at 3:00 PM with sophomore  “Nicky.” I also conducted an outside-of-class interview with a junior student named “Wendy.” The following are my notes:

-Dan and Wendy, along with several other observed students, use the time before class to catch-up on emails that are missed over the course of the day (the average student receives tons of emails, that can often go unread). While people could conceivably check their phones for emails this appears to be done more often on laptops, the option taken by Dan and Wendy.

-A minority of people who spend their time before class on laptops do it in activities other than email- one big one I saw was shopping. It did not appear to me that people on laptops often review their notes before lecture.

-Students who had out smart phones (a large portion of students outside of students on laptops) were often texting friends in outside classes. Only in a minority of cases were people playing phone games (of the “Temple Run,” “Angry Birds” variety).

-Nicky was a rare student in that he had pulled out his physical notebook and was looking over notes from the previous class. In “Imagined Languages” with Nikitas, the professor opens up every class by asking what we did in the last class. No one ever answers quickly.

-In big lecture halls it is often a problem that people do not move into the middle of a row of seats, making it difficult for someone who came late to class to find a good seat to sneak into. Perhaps there’s something there that could be done to encourage people to “clump” towards the middle of a row for more efficient seating.

-Very, very few people actually spoke to their neighbors. It would be nice to get people to interact more.

7. Email Attack!: The desire in a lot of people to use the free time productively was strong, and this app can make a mundane but important task fun and even more efficient.

14. Good eve’: Throughout the course of a busy day it might be difficult to plan recreational time with friends in the evening before it is too late, so this app could help people organize their often-unscheduled night plans early in the day.

Paper Prototypes for both: 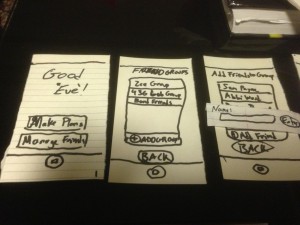 Welcome screen, friend group management screen, and “Add friends to group…” screen shown. These all flow from the “Manage Friends” button on the welcome screen 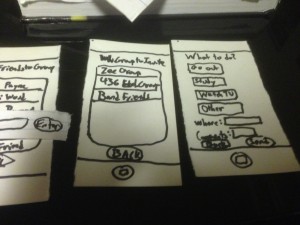 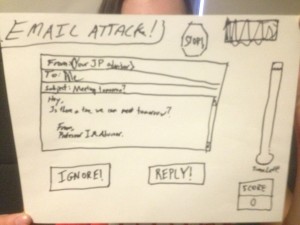 Game starts when selected in email. You are shown an email and you can either ignore or reply. There is a timer to the right of the screen showing how much time is left. 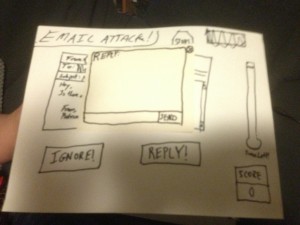 When you select reply a separate window pops up for you to type your reply, and send. When you hit send you go the next email. 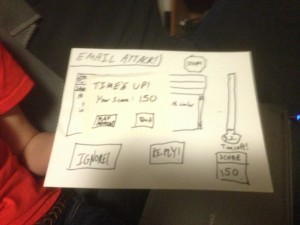 When the timer on the left runs out, the game ends. 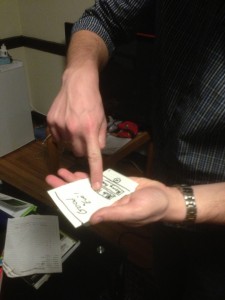 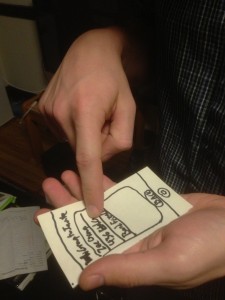 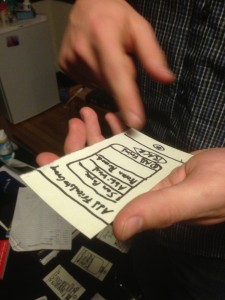 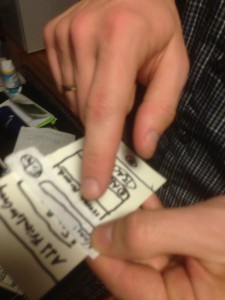 Ballard adding a friend to a group.

Here, Ballard was a bit confused about the nature of the names he was adding. Were they users on Facebook? Contacts on his phone? Other users in this service? 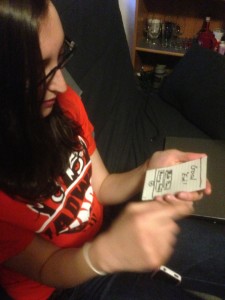 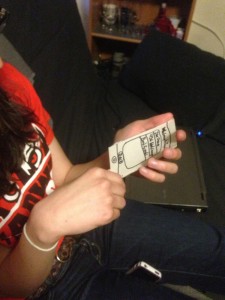 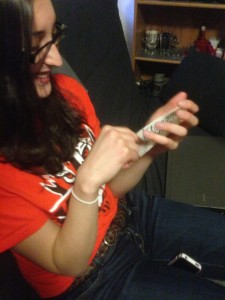 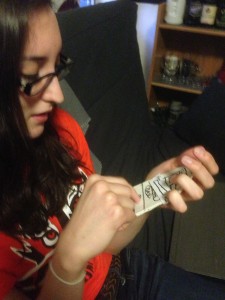 Karenna had similar questions, but otherwise the flow of the screens seemed logical. She also pointed out that several very obvious options were missing, such as when an event was to be planned.

-The friend menu, Ballard pointed out, had failed to implement a “remove friend” option. I imagine that it would look like most menus of this type on the iPhone, where you can swipe across a name and a “delete” button will appear on the name.

-I should have a menu in which you can add contacts, or sync the app to Facebook. That way messages can be sent out fairly naturally to a large array of users who may not even have this app necessarily

-I had envisioned a push notification on your phone when another user sends you plans, but it might be smarter to just have it sent through Facebook messages or a mass-text for non-Facebook users.

– A calendar-esque format might help for making plans further in advance.

-With multiple friend groups you should have the ability to view past plans made with a group, or manage multiple plans at a time with different groups. A “plan manager” menu should be added in which plans are treated as separate objects that can be moved around and edited with other members of the group.

-Might want to implement something akin to a scheduler that can coordinate meeting times between multiple people as a part of the app. 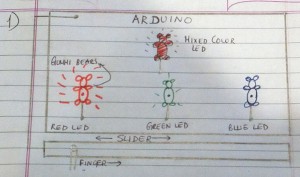 Sliding your finger on a slide-sensor transfers light between three R-G-B gummi bears! 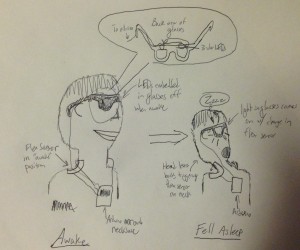 A device that detects when your head leans, indicating that you fell asleep. Triggers LEDs in glasses to wake you up

We built a color matching game. The computer will generate a random color, then the user must use a touch sensitive slide control to try and match that color. When the user thinks that they have matched the color they press a button to accept. A blue LED will flash if the colors match and a red LED will flash if they do not match. The game then resets and repeats. There is no score, or meta-game these can be added to later models if desired. The difficulty of the game can be adjusted to change how closely the colors must match. This first model of the game was built with a sensor which was not ideal for the task – the resistance characteristic is exponential rather than linear depending where the user presses on it. The controls were adjusted to correct for this, but the next model should be built with a sensor with a linear characteristic to improve the feel of the user’s controls.

Graph showing linear mixing of colors as finger slides across the sensor. 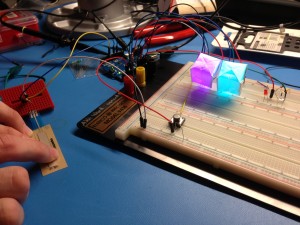 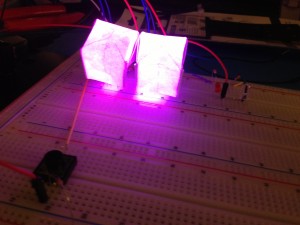 Diffuser shows off vibrant light in the dark

Follow the given schematic(below) to construct the circuit. The diffusers are built using small square pieces of paper (~3×3 inches) that are folded into origami paper ballons (see: http://www.youtube.com/watch?v=tSMLk_zGzf4). Cut a hole in the bottom of the balloon so that the LED can fit. Also, inside the balloon place a small sheet of 1-ply paper napkin to help diffuse the light. Finally, program the Arduino with the following code. 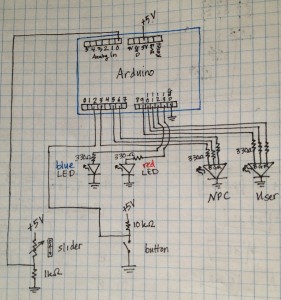 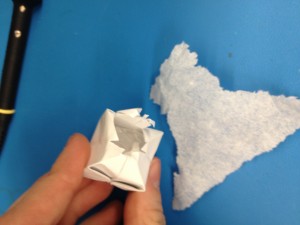