I. A 1-SENTENCE DESCRIPTION OF YOUR PROJECT

AcaKinect is voice record­ing soft­ware that uses a Kinect for gesture-based con­trol, which allows con­tent cre­ators to record mul­ti­ple loops and beat sequences and orga­nize them into four sec­tions on the screen, creating a more effi­cient and intu­itive way of pre­sent­ing a music record­ing inter­face for those less expe­ri­enced with the tech­ni­cal side of music production. 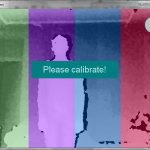 Calibration notification at the very beginning. 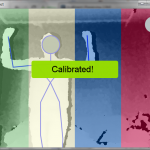 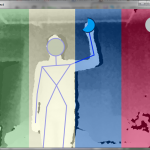 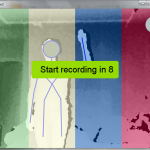 Once the loading circle fills up, notification to prepare to record. 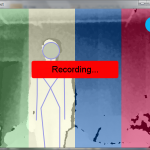 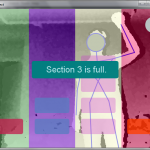 If user attempts to add more than four loops per section, message is displayed. 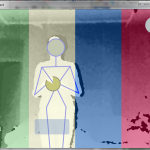 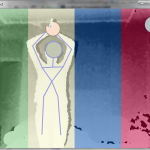 5. HOW AND WHY YOUR GOALS/DESIGN EVOLVED

The original concept for this project was much more complex. Over the course of development and testing, the specification was drastically simplified — coincidentally making development simpler, but more importantly, reaching our target audience more effectively. The original idea was to create a gesture based system, that enables highly complex music creation and manipulation intended for both live performance and recording. With some testing, we discovered that what we really should create a tool for those with little or no music production experience. For those with experience, there are hugely complex systems that offer all the detailed functionality needed. However, there are a large number of musicians who don’t even want to worry about music production at the level of Garageband; these may be very talented musicians who want to use loops and effects, but they may not be interested enough in the technical side of music production to go learn any specific piece of software or hardware. We decided that AcaKinect would slot in at the very bottom of this technological chain: simple enough to pick up and use immediately, and yet fun and flexible enough to retain users and potentially allow them to develop an interest in learning more complex music production tools.

We also realized that the format does not particularly suit recording well; if a user has progressed to the point of wanting to record, edit, and polish these creations, there are a huge number of software loopers available that offer much more flexibility, as previously mentioned; in addition, more experienced musicians who are looking to produce a record will probably turn to a full-fledged Digital Audio Workstation that allows maximum control at the cost of a rather higher learning curve. Thus, we see this as an experimental tool. One tester, who is the music director for an a cappella group on campus, commonly uses a midi keyboard for just this purpose; when arranging a piece for a cappella, he writes down each part and then plays them together on a keyboard to see how they sound. In these cases, it may be easier and more flexible to just test out these parts using AcaKinect, encouraging more exploration and experimentation. To that end, we pared down the specification to the bare minimum needed to provide a flexible looping environment with spatial awareness (columns) to suggest to the user how a piece of music might be structured. There are only two primary functions – record and delete – so the user is not confronted with anything approaching “mixing board” levels of complexity. The division into four sections, and the physical requirement of moving left and right in order to record in each section, suggests a natural split in what to record in each section; users naturally choose to record all percussive sounds in one, all of the bassline in a second, and then maybe a more prominent harmony in a third. This sets them up well for moving on to more complex musical production tools, where structuring loops and tracks in a hierarchy is very important while organizing, say, twenty tracks all at once.

We believe that with further work and development, this could be a viable and useful real-world system that fills a possible gap in the market that has never really been touched. We’ve already discussed how, in terms of simplicity and feature set, AcaKinect would be slotting in under all the music production software currently available; what we haven’t really covered is the opposite end of the music spectrum, which is currently occupied by games like Rock Band and Guitar Hero. These games do introduce a musical element in the form of rhythmic competence (and in the case of Rock Band, fairly lenient vocal pitch competence), but fundamentally the music is still generated by the game, and the user just kind of tags along for the ride. The goal for AcaKinect with further iteration is a product that is almost as game-like as Rock Band; a fun system for testing out loops and riffs in the living room, and a useful tool for playing with sound and prototyping arrangements. It’s important that AcaKinect is seen as more of an exploratory product; unlike working in a DAW where the user may have a very good idea what she wants to create, AcaKinect would be a live prototyping tool that enables a lot of exploration and iteration of various sounds and harmonies. The simplicity of the controls and the lack of any real learning curve only helps to make that a fairly easy task.

The application space, as far as music production (and even more loosely, music interaction) tools go, is giant, and spans all the way from Rock Band to Logic Pro. There is no real point going for new or extra functionality; whatever arcane feature you’re looking for, it probably already exists, or if it doesn’t, it would probably be best suited to a Logic plugin rather than a whole new product, since the pros are the ones looking for new features. Those who are intimidated by the sheer number of buttons and knobs and controls in a typical piece of music software or hardware seem to much prefer a great simplification of the whole music production process (as would make sense), and we found that there is a big opening in this space for software that can be picked up and used immediately by any musician, no matter whether she has technical background in music production or not.

There are still quite a few implementation challenges involved in making this product one that is truly easy to use for any musician. Firstly, given its intended use as a fun and exploratory product in the living room, it’s a little problematic that it only works for one person. If, say, a family is playing with it, it would be much better to allow several people to be recognized at once (even if only one loop is recorded at a time), so that several people may collaborate on a project. SimpleOpenNI is capable of tracking limbs for two people, which is generally what Kinects are used for in Xbox games as well; we could thus implement two people without too much extra trouble, but to do more may be difficult. Secondly, this prototype uses Processing and Minim for ease of coding, testing, and iteration; however, since Minim really wasn’t designed for low-latency audio looping, it has certain issues with timing and tempo for which we have implemented hacks to “get around.” However, in an actual polished product, latency would have to be much lower and the rhythm would have to be much more solid; to that end, a more robust audio framework (hooking directly into Apple’s CoreAudio libraries, for example) would allow us to achieve much better results.

Finally, there’s the issue of physical setup; the user needs to be able to hook up a microphone and play sound out of speakers such that the balance between the current vocal and the sound from the speakers is about right, but without triggering any feedback or recording the speaker output back in the microphone. There are advanced noise-cancellation techniques that can be implemented to signal-process away the feedback, but these will sometimes add artifacts to the recording; one way is just to require that the user use a highly directional microphone with a sharp signal strength falloff, so as to reduce the chance of feedback. An on-screen notification that informs the user of feedback and turns down the levels of the speakers when feedback occurs might also be convenient. Alternate setups may also be a good thing to test; a wireless clip-on mic of the sort used on stage during live performances, for example, may prove slightly more expensive, but it may let users feel less awkward and make gestures easier.