This post contains the oldest newsreels present in the Princeton University Archives. As discussed in our previous blog, Princeton University started making films in 1919, using the footage for its first promotional film in 1921. For earlier years, however, it was dependent on newsreel companies like Pathé, which filmed newsworthy stories and items of topical interest for movie theaters. The first film documents the inauguration of John Grier Hibben, fourteenth president of  Princeton University (1912-1932). The newsreels that follow show US President Woodrow Wilson, Hibben’s predecessor, when he returned to Princeton to vote in 1913 or 1915 and in 1916.

We do not know what company produced the silent newsreel about Hibben’s inauguration in 1912 as only the opening titles survive, but it is obvious what made the issue particularly newsworthy: William Howard Taft, President of the United States 1909-1913, was a guest at the ceremony.  He received an honorary degree, along with US Supreme Court Chief Justice Edward Douglass White. The newsreel opens with Taft posing with Hibben and his wife and daughter at Prospect House (0:14). It continues with Hibben and his distinguished guests, headed by Grand Marshal William Libbey ’77 and Taft’s personal aid, walking past faculty, trustees, students, and guests on Cannon Green, from where the procession marched to Nassau Hall (0:54). The Daily Princetonian describes the procession and following exercises in detail. The newsreel footage, however, shows very little of the ceremonies on the podium in front of Nassau Hall. Hibben’s inauguration and speech are shown at 1:36, followed by the conferment of honorary degrees to Chief Justice Williams (1:51) and President Taft (2:04).

The footage of Woodrow Wilson that follows Hibben’s inauguration (2:26) seems to have been taken from two different newsreels. Although the title and credits of both newsreels were almost completely removed, a remaining single frame of the first title survived–oddly enough in mirror image and shown corrected at the right. This footage may have been from Wilson’s visit on September 28, 1915, when he traveled to Princeton to vote in the Democratic primaries at the polling station on Chambers Street. (See the New York Times at NYTImes 28_Sep_1915.pdf.) Alternatively, it may depict him in the Democratic primaries of September 23, 1913, when he voted for James Fielder for Governor of New Jersey. (See NYTimes_23_Sep_1913.pdf.) 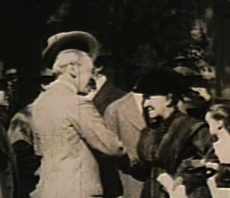 t follows at 3:15, showing Wilson greeting women, was taken when he voted in the NJ primary on  April 25, 1916. (For a photo of Wilson arriving by train, see the Historical Society of Princeton’s photo archives). During this visit, which is described in the Prince, Wilson participated in the planting of trees along the Lincoln Highway under the auspices of the New Jersey Federation of Women’s Clubs.
It is not known on what occasion the historic footage was copied onto the 16mm film reel on which it was found, though it must have happened after June 1940, when the footage of Hibben’s inauguration was displayed at the 25th reunion of the Class of 1915, whose members had witnessed the inauguration as freshmen.  (On May 17, 1940 Everett Frank ’15 wrote Don Griffin, Secretary of the Graduate Council, that he had located the newsreels, which Griffin was welcome to borrow). The Woodrow Wilson footage on the reel is followed by the commencement activities of what seems to be the Class of 1928. That, and related footage, will be the subject of a future blog.
This footage on this 16mm film is part of the University Archives’ Historical Audiovisual Collection (part of item no. 0192).

These newsreels are extremely rare for showing Woodrow Wilson in Princeton. Thank you for making them available for all of us.

You say, “The very brief footage that follows at 3:15, showing Wilson greeting women, was taken when he voted in the NJ primary on April 25, 1916.” In fact I believe this shows his visit of October 1915 (when he made an historic pro-suffrage vote), during which visit he wore identical clothing to what is shown in the newsreel and, in addition, Doctor Grayson wore identical clothing (based on still photos at AC117 box 242, one of which even shows the newsreel cameraman).