The film also mentions other PPPL experiments including soft x-ray lasers, plasma etching of electronics, and studies of the solar system’s magnetic fields. Proposed experiments were also described, such as a replacement for the TFTR, a new reactor called the Compact Ignition Tokamak (CIT).

While the PPPL has produced several similar promotional films, the message of optimism in this 1989 promo belies a year of difficulties for the Laboratory, as it faced challenges including the perceived threat of cold fusion, layoffs of 95 people due to a $12 million budget cut, and the resignation of director Howard P. Furth.

Despite these difficulties, the PPPL’s efforts to generate nuclear fusion continued. The Tokamak Fusion Test Reactor would go on to generate record amounts of man-made fusion power (10.7 million watts), produce record temperatures of 510 million degrees, and discover new methods of plasma confinement. While TFTR was retired in 1997, the PPPL continues to research nuclear fusion with a new reactor, the National Spherical Torus Experiment (NSTX). 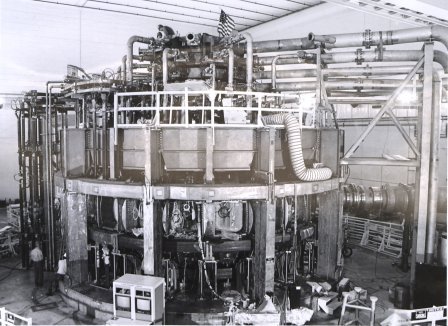 The Tokamak Fusion Test Reactor in 1982.

The Seeley G. Mudd Manuscript Library has a great deal of information concerning the Princeton Plasma Physics Laboratory in a variety of Princeton University Archives collections, including:

This VHS video is part of the University Archives’ Historical Audiovisual Collection (Item no. 1491)