In this short video from around 1983, President Bowen discusses Wu Hall, the then-new dining facility for Butler College. The video highlights three elements that played increasingly significant roles in shaping Princeton over the following decades: the support of alumnus Gordon Wu, the residential colleges system, and the architecture of alumnus Robert Venturi.

We don’t know the exact purpose for which this video was created, but it may have been part of the promotional material for A Campaign for Princeton, the fundraising campaign that officially ran from 1982 to 1986. As previously discussed on this blog, A Campaign for Princeton was enormously successful, bringing in an average of $1,000,000 per week at its height.

The Support of Gordon Wu ’58

In 1981, before the campaign even officially began, alumnus Gordon Y.S. Wu donated $1,000,000 to it. Wu earned a Bachelor’s of Science in Engineering from Princeton in 1958 and subsequently returned to his native Hong Kong. There, he founded Hopewell Holdings, a firm whose notable projects have included highways, hotels, railroads and power plants throughout Asia. Wu has been described as one of the wealthiest businessmen in Hong Kong and as one of the most influential engineers and businessmen in the world.
As A Campaign for Princeton was officially being launched in 1982, Princeton announced that Wu had donated an additional 25 million Hong Kong dollars in honor of his class’s upcoming 25th anniversary reunion. The funds, then equal to approximately USD $4.3 million, were used primarily to construct a dining facility for the then-new Butler College.
As generous as these donations were, they represented only a small fraction of what was to come. In 1995, Wu made a historic pledge to the With One Accord fundraising campaign, which was held as part of the University’s 250th anniversary. That year, Wu pledged to donate USD $100 million, the largest gift ever by a foreigner to a U.S. university, with the last payment scheduled to coincide with his class’ 50th anniversary reunion in 2008. Wu is currently serving as a Trustee of Princeton University, with a term ending in 2012. 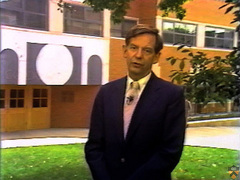 The Vision of William Bowen *58

Although dwarfed in magnitude by his later donations, Wu’s 1982 donation has impacted the lives of literally thousands of Princetonians. It gave physical form to President Bowen’s aspirations for the residential college system, which has defined the Princeton undergraduate experience for every class since.
President Bowen (right) formed the Committee on Undergraduate Residential Life (CURL) in 1978. Made up of administrators, faculty and students, the committee was charged with addressing the intertwined issues of Princeton student housing, dining and socialization. Although some of the proposals in the committee’s final report – particularly those relating to eating clubs – did not come to pass, its primary proposal, the establishment of three new residential colleges, came to fruition within a few short years.
Two of the three new colleges, Rockefeller and Mathey, were established in extant buildings in Princeton’s traditional collegiate gothic style. Butler College, however, was housed in the “New New Quad,” which the Daily Princetonian defined for incoming freshman as, “Group of five newer dorms located on the lower-lower campus, fondly known as “The Sticks,” “New New World,” or “Brave New Quad.””
The construction of Wu Hall transformed this “group of dorms” into a true residential college. As the first Master of Butler College, Emory Elliot, said near the end of the first semester that Wu Hall was open, “It’s enabled the spirit of the college to come into full blossom.” He also described the new servery and dining facility as having a “friendly atmosphere conducive to having people come together.” Footage about Butler College and Wu Hall after the 2009 renovations can be found here.

In keeping with Wu Hall’s symbolic role as the vanguard of a new mode of Princeton undergraduate life, the university chose an architect known for his innovative and thoughtful work: Robert Venturi, who graduated from Princeton in 1947 and also earned an M.F.A. from Princeton in 1950. Venturi’s firm, Venturi, Scott Brown and Associates, describes the Wu Hall project this way:
The firm faced the challenge of creating a new building that would provide an identity for the new college, serve as a focal point for its social life and also give a sense of cohesiveness with other Butler College facilities in two existing buildings of disparate styles … The building’s design takes important cues from adjacent structures but also promotes an identity of its own… Brick walls, limestone trim and strip windows adhere to the traditional Gothic architecture of Princeton. The main entrance, set off-center and broadside in the building, is marked by a bold marble and gray granite panel recalling early Renaissance ornament and symbolizing the entrance to the College as a whole as well as to the building itself. 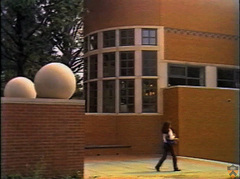 Wu Hall was a critical and artistic success, winning eight different awards for its architecture and interior design. As noted by Princeton University Interactive Campus History, “This critical acclaim was something new for the University, which had been castigated for years for the stylistic timidity of its modern buildings — especially when compared to the architectural daring of its peers in New Haven and Cambridge.” A preliminary study for the entrance and elevation, and a preliminary study of the entrance and windows now reside in The Museum of Modern Art.
Not all reactions to Wu Hall were positive, however. The anti-Venturi mood among students reached a fever pitch in February 1986, when it was announced that his firm had been selected to design what would be its third building on campus. The pages of the Daily Prince featured impassioned editorials and letters on the subject, including a notable point-counterpoint piece in which Daniel M. Fuchs ’87 wrote:
…(T)he interior of the building gives a new meaning to the phrase “incompetent designing.” A great deal of space is completely useless, while other areas are so crowded as to make Nassau Street at rush hour seem empty in comparison. Moreover, if someone were to try to design a dining hall nosier than the one Mr. Venturi gave us, the feat would undoubtedly consume several years of ceaseless toil … If we want Mr. Venturi’s kind of postmodernistic garish trash, we can ask Helmut Jahn or Michael Graves to design the new building… If we want an architect with a link to Princeton University, such individuals are legion (including, unfortunately, Mr. Graves)
Even the student who wrote the pro-Venturi piece for that issue, Marc Picciotto ’86, noted that, “It has become fashionable at Princeton to criticize the campus architecture of Robert Venturi ’47.”
Several months later, the Daily Prince published an interview with Venturi about his work on the Princeton campus, and about his architectural beliefs in general. Venturi expressed regret that his Princeton buildings were controversial, but also defended them:
To me it’s kind of sad, because we were considered outrageous architectural thinkers and architects when I was young, and now practically everyone is doing what we’ve said. Now that doesn’t mean that if you’re controversial, you’re good. You just have to do your best at any moment, and hope that people will like it. I feel sad — I feel very sad about this (controversy), but on the other hand we did the best we could. I feel sad because I don’t like to make it hard for the people who put their faith in us, the trustees. So I feel sad about that, but on the other hand I think what we’ve done is good, and maybe soon people will come around, and what we’ve done will be considered more or less ordinary or in the mainstream.
Apparently the people at Princeton who had put their faith in Venturi were not overly troubled by the controversy his buildings created. To date, his firm has designed five projects on campus: Wu Hall (1983), Lewis Thomas Laboratory (1986), Fisher and Bendheim Halls (1990), Schultz Laboratory (1993) and Frist Campus Center (2000), as well as portions of the Princeton Club of New York(1990 and 1991).
— Christie Peterson, University Archives Project Archivist
This VHS video is part of the University Archives’ Historical Audiovisual Collection (item no. 1327). Images are taken from this film.