Do You Even Lift?

a. Also keeps from you from having to go under the desk or somewhere inconvenient. 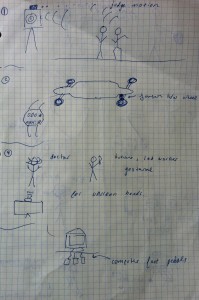 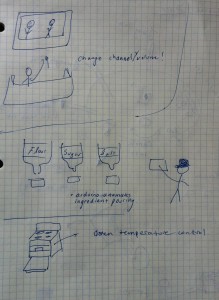 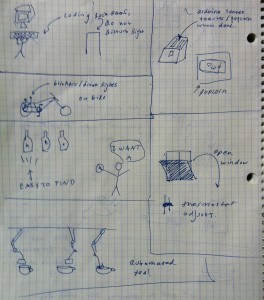 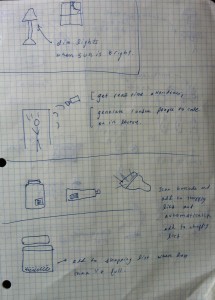 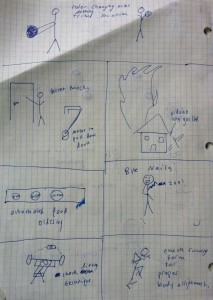 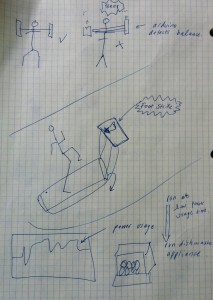 Our first choice is a kinect-based trainer for the weight room. This device would use a camera and body-tracking APIs to identify problems in form and point out fixes. It could also provide a full tutorial on how to do the lift, useful for a complete novice. We like the idea because:

If we can’t have a kinect, our second choice is to try using a standard webcam-based system to the same effect, or to just go and spend all of our budget on another kinect.

If none of the above pans out, another project we are interested in is an Arduino-based window thermostat, ideal for dorm rooms. The device could open and shut the windows when the room is too hot or cold, and could roll up the shades in the morning when it’s time to wake up. We think this could accomplished pretty efficiently and would be useful for your typical lazy college student. It has room for extra goals in the form of learning and adapting to the user’s patterns.

Target User Group – The system would aimed primarily at novice weightlifters. The system could start from scratch, assuming no user knowledge of the lift, and teach it in stages. The system’s ability to identify subtle problems in form could be useful for trainees of all skill levels, though, as some common problems in form are very tricky to notice on your own (e.g. not having the back in the right spot on the back in a squat, or allowing the lumbar to round in a deadlift).

Problem Description & Context – We are looking to solve the problem of inexperienced weightlifters doing lifts inefficiently or dangerously by compromising their form. This solution could offer guidance on how to correct these problems, as well as more general advice on routines and workout programming. We envision addressing this in the weightroom, right where the user does his/her lifts. Users will have varying experience levels, and we don’t want to interrupt experienced lifters who would rather not be annoyed. Some users might have different or mis-concieved opinions on how a lift should be done, and might choose to ignore some or all of the advice given. Some users might have friends or (human) trainers with them to help out.

Technology Platform – We imagine this working with a Windows PC (probably one of our laptops initially) hooked up to a Kinect. This gives us body-tracking APIs that will make it much easier to identify what the user is doing. Unless these saturate the gym, they could be placed on something like a cart with wheels, so that it can monitor different exercises or from different angles. If the idea takes off, the technology could be incorporated directly into exercise equipment like squat racks. 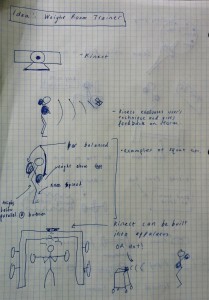 -Using a kinect, monitor lifting technique and give the user feedback
-System can evaluate technique and also give instructions to user
-Can be built in to lifting equipment or implemented separtately 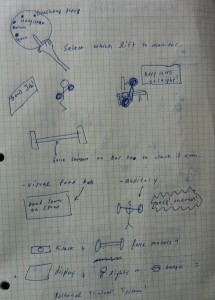 -User will be able to select from different lifts they want to perform.
-Visual and auditory display will give feedback (“Good Job!”, “Keep Arms Even”…) as well as act as the interface for selecting lifts or receiving instruction.
-Monitor/Audio can show “ideal” lifts teach user. 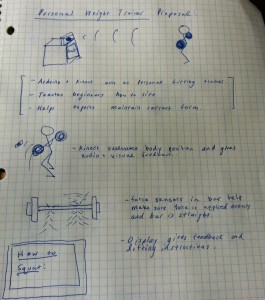