Choice 1:
Idea 47: Kinect based head movement tracker that will allow for exploration of a remote environment according to your head movements and pans around to display the image in that direction on a display.

We picked this amongst all the possibilities in the list because it has a clear application for us and what we are studying in terms of using HCI to break past the stagnant interface that is the mouse and keyboard.  It involves a more natural way of computer interaction as it allows for humans to intuitively turn their heads and have an imaginary camera replicate this movement to show what one wants to see in a remote environment. This can be accomplished through panning around a panoramic image or actually controlling a rotating video camera through Kinect.  It also involves a complex enough challenge in head tracking that it is not trivial.

Target users: Our project may be broadly aimed towards anyone who wants to remotely visualize an environment. However, for purposes of our project, we specifically identify people who wish to travel but do not have the time or funds to do so.  These users seek a means for exploring a space as naturally and intuitively as possible (the stronger the sense of immersion, the better) and need a system that can bring the sights and sounds to the area to them with the least sense of artifice possible. Possible applications that we could apply this to include Google Streetview and virtual tours.

Problem description and context: Currently, exploring remote environments through applications such as Google Streetview rely on the clunky interface that is the mouse and keyboard.  Unfortunately, this is an unintuitive tool that often causes people to awkwardly explore an environment through clicking arrows and pressing keys.  This makes true immersion impossible.  The goal of our project is to create an interface to make remote viewing of an environment much more intuitive.  We aim to improve the situation by replacing the mouse and keyboard with Kinect-based head tracking used to pan around the environment.  The image of the environment will then be displayed on a mobile display so as to always keep the display in view of the user.  Aspects that may influence the problem solution include the demand for viewpoints; that is, each user will require a unique viewer of the environment that will respond only to his/her movements.  If there is high demand, then an easily scaled solution may be necessary, such as virtualizing the experience into an exploration of a panoramic image.  Panoramic images are easily supplied as anyone can take a panoramic image and upload it for multiple users to concurrently use.  By having others upload panoramic images, this also allows us to solve a time and location problem, as we will not have to actually travel to the viewpoint to get the image.  Our user group is characterized by little available time and money.  We thus will want to aim to keep the cost of accessing our tool low.  Related solutions to this problem include the Oculus Rift; however, the Oculus Rift is at this point an unproven technology and is far from being easily obtainable.

Technology platform choice: We choose to use the Kinect as it offers the necessary support for head tracking which we need to control the exploration of our remote environment with. We also choose to display the scenery on a mobile display such as a laptop screen, iPad, or smartphone held by the user as it allows us to change the view of the scenery while keeping the display in view of the user. 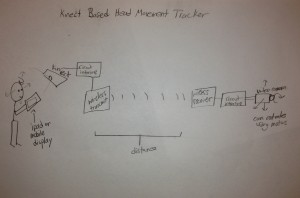 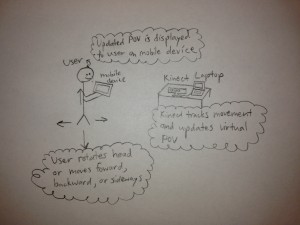 Choice 2 (non-Kinect backup):
Idea 10: Intelligent alarm clock controlled by pressure sensors on a bed, refusing to turn off until the owner gets up off the bed.

Although this is a simple idea, we think it would be very practical.  Actually, we would really like to have this and wonder why no one has done this before.  Our target user group is people who have trouble waking up in the morning.  We’re specifically interested in users who frequently catch themselves sleeping through alarms and/or turning them off without remembering doing so.  Conventional alarm clocks are not sufficient for these users because they are so easy to ignore or turn off.  What they need is something more persistent, but intelligently so.  An alarm that is excessively difficult to turn off will indeed force these users to get up in the desired situations, but in others (for example, if the user has been up all night, has already woken up, or is sleeping elsewhere), the system is an annoyance.  These users want an alarm that is persistent only when it needs to be–that is, have sensitivity for context.  We can always add features to enhance this device in case it is too simple (automatic prompt for alarm when body detected, context-aware alarm types, or daylight tracking). 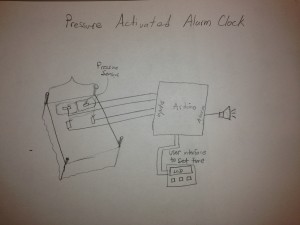