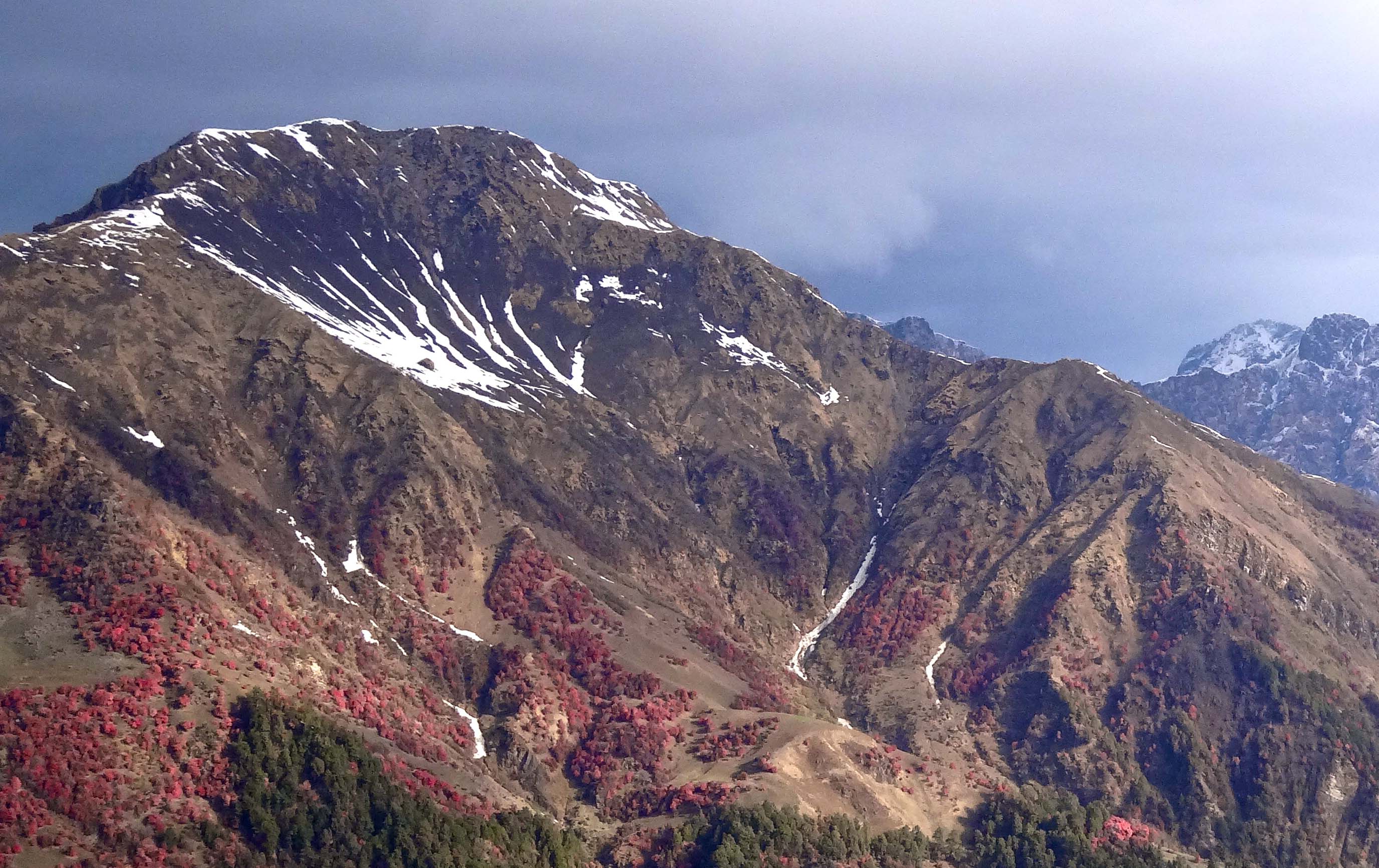 By Morgan Kelly, Office of Communications

While that’s certainly how they appear from a ground-level human viewpoint, a new study shows that pyramid-shaped mountains are not only a minority in nature, but also that most ranges actually increase in area at higher elevations. Besides reshaping the mountains in our mind’s eye, the findings could lead scientists to reconsider conservation strategies — which are often based on misconceptions about mountain terrain — for mountain animal species threatened by climate change.

Researchers at Princeton University and the University of Connecticut conducted the first study to map the shape of the world’s major mountain ranges and found that the classic triangular form in which land-area uniformly decreases as elevation increases only applies to roughly one-third of the world’s mountain ranges, according to a report in the journal Nature Climate Change.

Instead, the 182 mountain ranges the researchers studied take on four principal shapes: diamond, pyramid, inverted pyramid and hourglass. The researchers analyzed high-resolution topography maps for every mountain range to determine land area by elevation. They found that for all the range shapes except pyramid, land availability can be greater at higher elevations than it is farther down the mountainside.

Yet, people’s idea that land area steadily shrinks as a mountain rises is so entrenched that it has come to guide conservation plans and research related to climate change, said first author Paul Elsen, a Princeton graduate student of ecology and evolutionary biology. Scientists project that as mountain species move to higher elevations to escape rising global temperatures they will face a consistent loss of territory — as well as an increase in resource competition — that all but ensures their eventual extinction.

While this risk exists in pyramid-shaped ranges, many species in other range types might in fact benefit from seeking higher altitudes if they move to an elevation with more land area than the one they left, Elsen said. The researchers’ results could be used to more precisely identify those elevation zones where species will encounter territory losses and potentially become more threatened as they move upward, he said. The limited resources that exist for conservation could then be targeted to those species.

“This work should completely change the way we see mountains,” Elsen said. “No one has looked at the shapes of mountain ranges across the entire globe, and I don’t think anyone would expect that only 30 percent of the ranges in the world have this pyramid shape that we have assumed is the dominant shape of mountains.

“That has been the prevailing image of mountains in the public perception and the scientific perception, and it’s really had a big influence on how scientists think mountain species will respond to climate change,” he said.

The researchers are the first to measure available area by elevation — known as the hypsographic curve — at the scale at which animals actually live, said co-author Morgan Tingley, a University of Connecticut assistant professor of ecology and evolutionary biology and a past postdoctoral research associate in the Program in Science, Technology and Environmental Policy in Princeton’s Woodrow Wilson School of Public and International Affairs.

“People have explored the global pattern wherein you take all the surface area on the Earth and look at availability versus elevation. If you do that, then you do get a nice pyramidal pattern for all mountain ranges because there are so many low-elevation non-mountainous parts of the world,” Tingley said.

“But that’s not a relevant scale for species or conservation. There is no globally distributed mountain species,” he said. “At the spatial scales at which species live, the majority of mountain regions are not pyramids.”

Elsen and Tingley examined ranges on every continent except Antarctica spanning altitudes from zero to more than 8,500 meters (27,887 feet), which is the approximate maximum height of the Himalayas. A majority of the ranges they studied (39 percent) such as the Rocky Mountains are diamond-shaped, meaning that land-area increases from the bottom until the mid-elevation range before contracting quickly.

Hourglass-shaped mountain ranges such as the Himalayas make up 23 percent of ranges. Land area in these types rises slightly then decreases at mid-elevations before increasing sharply at higher elevations.

The nearby Kunlun Mountains of China are representative of the 6 percent of ranges worldwide that take the form of inverse pyramids, which gradually expand in area as elevation increases before, like the hourglass ranges, suddenly widening toward their peaks.

A mainstay of the human mind, pyramid-shaped mountains such as the Alps constitute only 32 percent of the mountain ranges that Elsen and Tingley studied. These mountains have sides that rise sharply and consistently decrease in area the higher they go.

On the other hand, the other range shapes are formed by a series of slopes that rise to open, wide plateaus situated at the base of yet more slopes, Elsen said. These mountains are akin to scaling a giant table where a leg represents a steep, limited-area climb that leads to a high-altitude expanse, he said.

“We expected some interesting exceptions to the pyramid shape – it turned out that pyramids are by far the exception. It’s something that twists your mind around,” Elsen said. “I really encourage people trying to grasp this for the first time to take less of a two-dimensional perspective of looking from the side and picture the range from above — a mountain range is a very three-dimensional system.”

The researchers point out that animals that could benefit from an increase in elevation may still face other threats — habitat loss, food availability and exposure to existing animals and diseases, for instance. Even the range shapes themselves provide unique areas of concern — hourglass-shaped ranges such as the Himalayas, for instance, present a “bottleneck” at mid-elevation that could become overwhelmed with species moving upslope from more expansive lower elevations.

“Not every elevation holds equal value for conservation,” Tingley said. Our research suggests that some gradients, and some portions of gradients, will be more important than others. Protecting land within an elevational bottleneck, for example, will be critical. That is where species will be greatly pressured, and often long before they reach the mountaintop.”