3d modeling is often a highly unintuitive task because of the disparity between the 3d work space and the 2d interface used to access and manipulate it. Currently, 3d modeling is typically done on a 2d display, with a mouse that works on a 2d plane. This combination of two 2d interfaces to interact with a 3d one (with the help of keyboard shortcuts and application tools) is hard to learn and unintuitive to work with. A 3d, gesture-based interface for 3d modeling combines virtual space and physical space in a way that is much more natural and intuitive to view and interact with. Such a system would have less of a learning curve and facilitate more efficient interactions in 3d modeling.

Our target user group is limited to individuals who regularly interact with 3d data and representations, and who seek to manipulate it in some way that depends on visual feedback. These are the people who would find the most practical use out of our system, and who would benefit most in their workflow.

Our first user was a professor in Computer Graphics. He has been doing 3D graphics for many years and has some experience with many different programs and interfaces for manipulating 3D data. However, he stated that he didn’t personally do heavy 3D tasks anymore (at least with the interface he showed us); however, he often shows new students how to use these interfaces. He likes exploring applications of 3D graphics to the humanities, such as developing systems for archaeological reconstruction. He does not focus much on interfaces, as he believes that a good spatial sense is more useful than an accessible interface (though for the applications that he develops, he is happy to alter the interface based on user feedback).

Our second user was a graduate student in Computer Graphics who has been at Princeton for several years. He has experience in 3D modelling using Maya, and his primary research project related to with designing interfaces for viewing and labelling 3D data. Because of his research and undergraduate background, he had a lot of background in basic 3D viewing manipulations and was very adept at getting the views he wanted. His priority for his interfaces was making them accessible to other, inexperienced users; this was because his research is supposed to be used for labelling objects in point clouds (which could be outsourced). In terms of likes and dislikes, he stated that he did not really get into modelling because it required too much refinement time and effort.

Our third interviewee was an undergraduate computer science student from another university. He has experience in modelling and animation in Maya, and did so as a hobby several years ago. He has taken courses in graphics and game design, and has a lot of gaming experience. However, his experience with Maya was entirely self-taught, and he acknowledged that his workflows were probably very unlike those of expert users. Because of this, his priorities were not speed or accuracy of tasks, but being able to create interesting effects and results. He was happiest when experimenting with the sophisticated, “expert” features.

We observed our first two CI subjects in their offices, with their own computers, monitors, mice, and keyboards. They were usually alone and focused on their task while using their systems. The last user did his modelling in his home or dorm room, generally alone or working with friends. We asked our subjects to show us the programs that they used to do 3D manipulation/modelling, and perform some of the tasks that they normally would. Following the master-apprentice model, we then asked them to go over the tasks again, and explain what they were doing as if they were training us to perform the same things. After this, we tried to delve a bit deeper into some of the manipulations that they seemed to take for granted (such as using the mouse to rotate and zoom) and have them try to break down how they did it, and why they might have glossed over it. Finally, we had a general discussion about their impressions about 3D manipulation in general, especially focusing on other interfaces they had used in the past and the benefits/downsides compared to their current programs.

The most common universal task was viewing the 3D models from different perspectives – each user was constantly rotating the view of the data (much less frequently panning or dollying). Another fairly common task was selecting something in the 3D space (whether a surface, a point, or a model). After selection, the two common themes were some sort of spatial manipulation of the selected object (like moving or rotating it), or non-spatial property editing of the selected object (like setting a label or changing a color). It seems that the constant rotation was helpful for maintaining a spatial sense of the object as truly 3D data, since without the movement it could simply look like a 2D picture of it (this is especially true because you can translate or zoom a single 2D image without gaining any more 3D information, whereas rotation is a uniquely 3D operation).

Essentially all of the operations we observed being performed fell into the categories mentioned above.

Our first user’s program was used for aligning several 3D scans to form a single 3D model; his operations involved viewing several unaligned scans, selecting a single one, and moving/rotating it until it was approximately aligned with another model. We noted that he could not simultaneously change views and move the scans, so he often had to switch back and forth between changing views and manipulating the object.

Our second interviewee showed us his research interface for labeling point cloud data. The point cloud data labeling application was really primarily about viewing manipulations: the program showed the user a region of a point cloud, and the user would indicate whether it was a car, streetlight, tree, etc. The user only really had to rotate/pan/zoom a little bit if necessary to see different views of the object under consideration, and sometimes select pre-segmented regions of the point cloud.

The Maya workflow was far more complex. For example, the skinning process consisted of creating a skeleton (with joints and bones), associating points on the model surface with sections of the skeleton, and then moving the joints. The first part was very imprecise, since it involved repeatedly creating joints at specific locations in space. After creating a joint, the user had to carefully drag it into the desired position (using the top, side, and front views). The user thought this was rather tedious, although the multiple views made it easy to be very precise. He did not go into much detail about the skinning process, using a smart skinning tool instead of “painting skinning weights” on the surface (which basically looked like spray-painting the surface with the mouse). Finally, joint manipulation just involved a small sphere around the joint that had to be rotated using the mouse. He also described how the advanced features generally worked (but didn’t actually show them) and described them as generally involving selecting a point and dragging it elsewhere, or setting properties of the selected object.

We intend to include functionality for most basic types of object manipulation (rotation, translation, scale), which will be mapped to specific gestures, typically with both hands and arms. We also want to allow for more precise manipulation such as selection/distortion and 3d painting, which involve gestures using specific fingers in more precise movements. To add control and selection capabilities, we hope to incorporate a tablet or keyboard, perhaps to change interaction modes or select properties such as colors and objects. Together, these will encompass a considerable portion of the functionality that basic 2d interfaces provide currently, while making the interaction more intuitive because it is happening in 3d space. 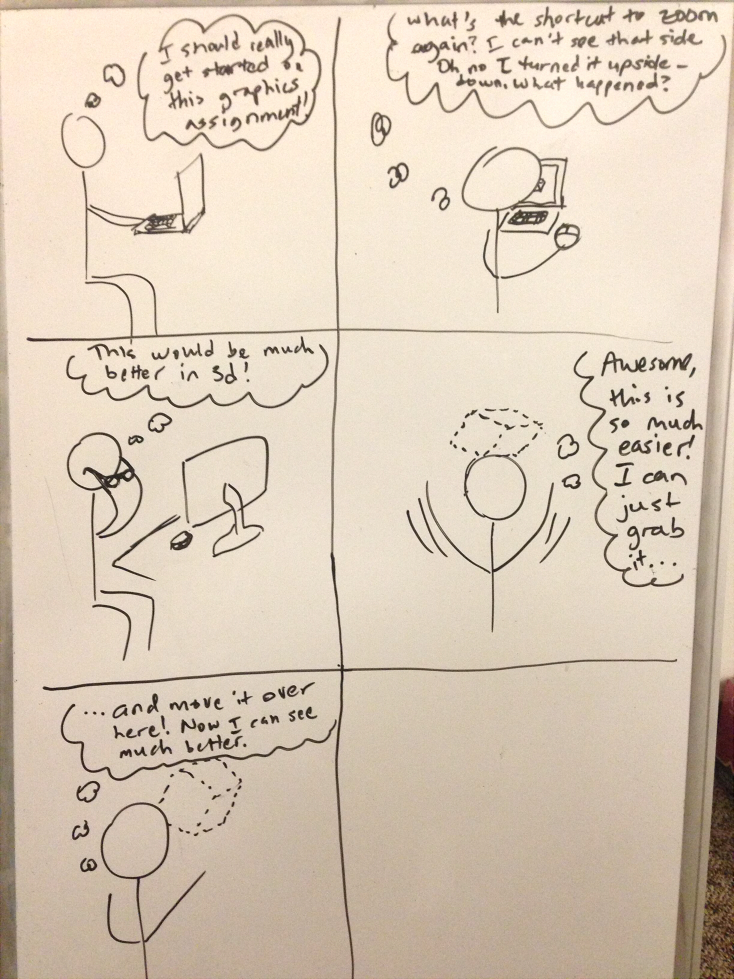 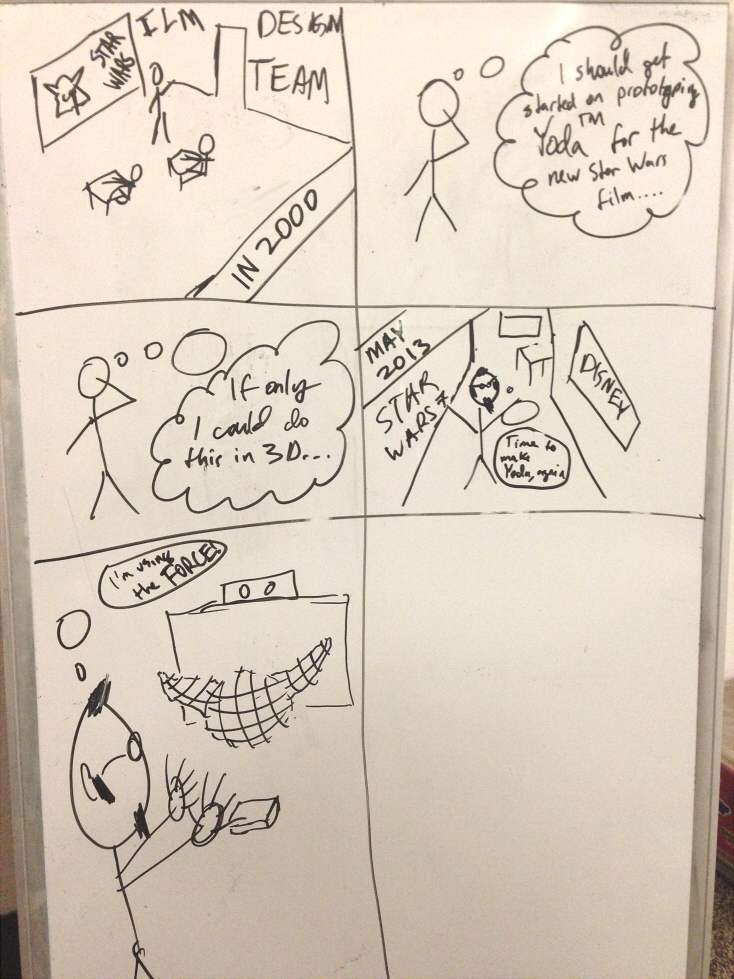 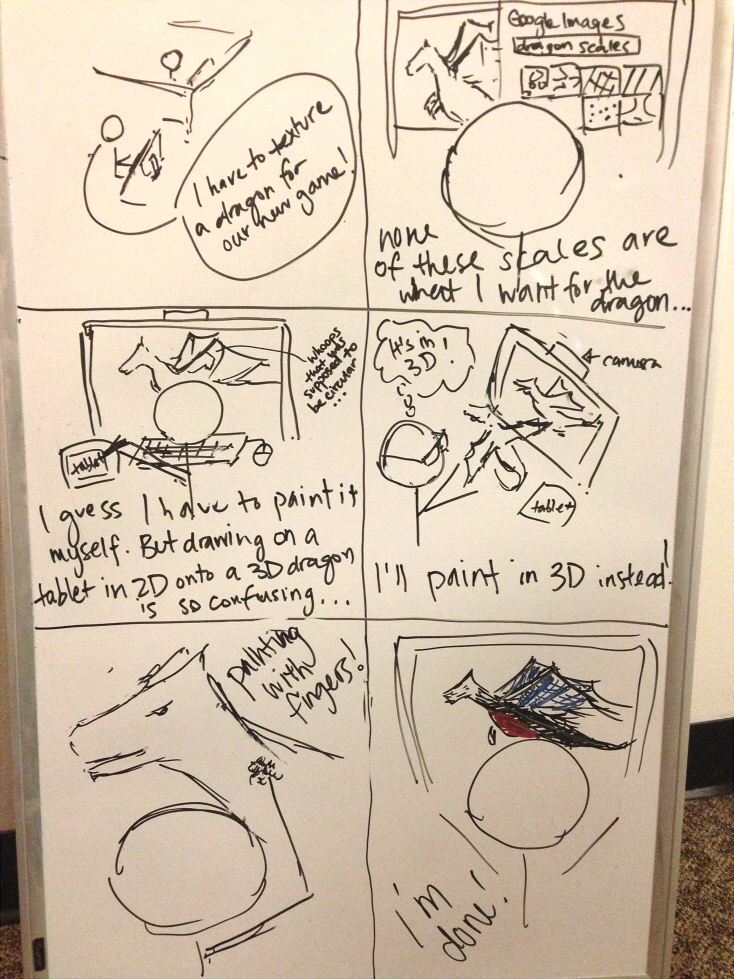 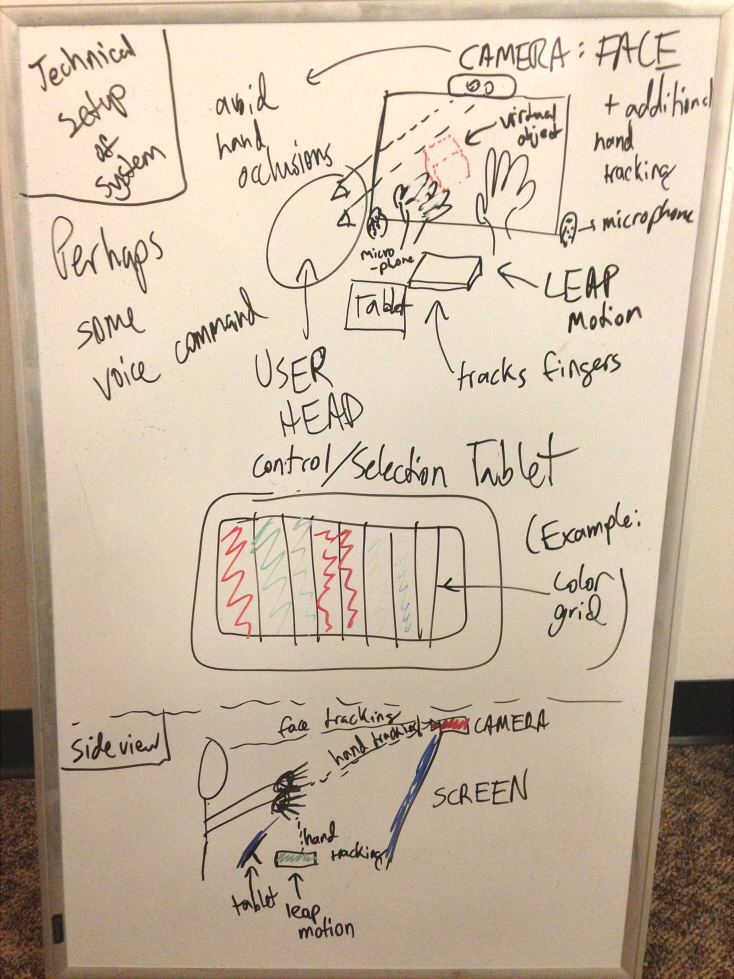 Top: Front view of the system, including all component devices. Middle: Tablet (or keyboard) for additional selection and control, like mode or color change. Bottom: Side view of system, showing the devices and basic form of interaction. 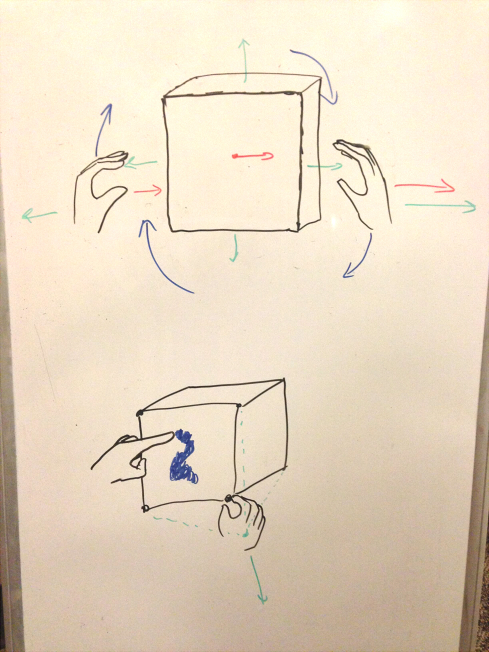 Top: basic ways for the user to interact with the system using hand gestures. Bottom: More precise gestures and interactions that require greater accuracy. (Not shown: control mechanisms such as a tablet or keyboard to switch between them, or provide extra choices for functionality)