For this lab we built a robot with four legs that pulls itself along a string. Its four legs are the tips of ballpoint pens, allowing for a smooth gliding motion on relatively frictionless surfaces. Our original inspiration for the robot came from an idea we had to build a robot that opened and closed window shades according to how much light was in a room. This robot would move vertically rather than horizontally, doing so by using a motor to pull itself up a string. We decided to test this method of locomotion horizontally first. We were very pleased with the success of our robot- we did not imagine that it would move so well over the table surface, and in future iterations of this robot we could have it do interesting things in how it moves. The ballpoint pen tips were extremely useful tools for motion along a surface. Unfortunately we do not think the method we used to collect the string once the robot pulled it worked well (we simply wind it up on the end of the motor), and in future iterations we think that the robot should have a way of going one direction on the string, then reversing the motor and going the other direction. In total, however, we think that this method of motion could have many applications.

We chose to prototype Idea 10, a robot which eats a line of string to move forward. 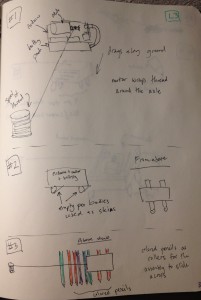 Assembling the robot, use of the string and using pencils to reduce friction 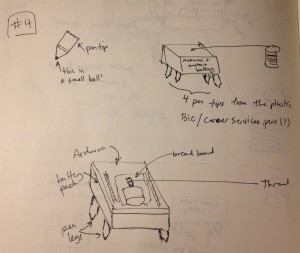 Using only pencil tips to minimize ground friction, instead of rolling pencils

Demo of our System

Source Code for the Robot