We are creating a jacket that allows users to experience their music through vibrating motors.

Description of the Test Method:

Once our subject arrives, we tell them our mission statement and inform them about what they will experience in testing our prototype. Since our system involves a significant amount of physical interaction with the subject, it is especially important that we demonstrate the system to make sure the subject will feel comfortable. We want to make sure that the subject would find the level of physicality required to prototype our system acceptable, so we will describe what will happen in the test before they have to go through it themselves. We also present the subject a consent form more formally detailing the experience. It also informs them that their identity will be kept confidential within the lab group (Click here to see the consent form).

We sent an email out to several listservs soliciting “consumers of dance/electronica/dubstep or just people who like feeling a good beat” to participate in the testing of a system that would allow them to “feel” music. The subjects we ultimately chose perfectly fit into our target audience. Two of them were regular rave/concert-goers who enjoy the physical sensation of feeling music. Our third subject enjoys music more casually, but still goes to the Street regularly. All three, we believed, would offer the best feedback in relating the sensation provided by the vibrating motors to the pleasurable sensations of loud concerts.

For our testing, we were required to work with our prototype the undergraduate ELE laboratory. Only there could we have access to the power supply for the vibrating motors. (We cannot power the motors from the Arduino since the total current drawn would probably burn out the pins) Since the task of “feeling” music can be done anywhere however, location was not a salient aspect of our prototyping phase.

To conduct the study, Dillon greeted the subjects and read them the demo script and acquired their informed consent. He would then introduce the subjects to Abbi, who would proceed to test the prototype band of motors in different areas of the user’s body and solicit their reaction. Abbi’s script was roughly as follows:

“First, we are going to see where you prefer to feel the sensation of the vibrating motors. If you are not comfortable with a motor’s location, please let us know. We are also going to vary how loosely the motors are in contact with your body. [Hold motor band up to different parts of back] How does the vibration sensation compare between different parts of your body? Which motors along your back elicit the strongest sensation? How would you rank the different locations of the motors on your body? How would you compare the different levels of pressure you felt?”

The motors were placed on various parts of the participants’ backs. We tested the shoulder blades, horizontally across the spine from the upper back to the lower back, as well as the sides of the lower back. 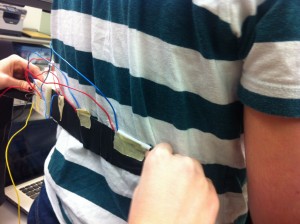 Testing procedure on the lower back 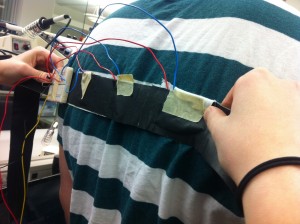 Testing procedure on the mid-upper back 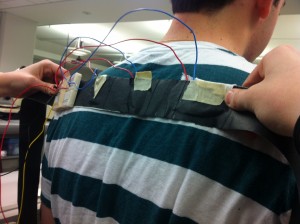 Testing procedure on the upper back, between shoulders

This line of questioning proceeded until the user offered sufficient feedback about how different motors’ locations on the back compared to each other. Sam and Prerna recorded the user’s feedback for later consideration. Once this phase of testing was complete, we introduced the user to the jacket prototype and explained how the motors they just felt would be embedded in it. We asked them to rate how likely they would be to wear it/ how they would use it, what sort of articles of clothing they typically wear, and if they believe the best sensations they felt in the first phase of prototyping would be achievable through the jacket.

We had 3 user testers – 2 female and 1 male student who enjoyed listening to music, albeit under different circumstances. Testers invariably said they preferred the tighter fit of the motors much better than the looser fit. They found it slightly uncomfortable when the fit was looser and felt the experience was a lot more pleasurable when the motors were held tightly against their backs. In terms of location, users did not enjoy the sensation on their shoulders, and preferred the vibrating motors located on their middle and lower backs. In terms of the vertical placement, we found that our male user tester did not experience the sensation around the spine as well as our female test subjects did.

All three also said they preferred the sensation on their muscular regions of the back rather than on the bony regions, which they said seemed slightly uncomfortable. The most pleasurable sensations were experienced in the mid-lower back region, around the muscular parts. We also asked questions about wearability and usability of our jacket, and test subjects had varying opinions. While one said he would prefer the jacket/ hoodie form due to portability and easy of use, the other two said they might prefer a tighter, undershirt/ vest setup due to closer contact with the skin. They also said they would be likely to use the vest under specific circumstances of artistic immersions such as a silent disco or a visit to a sculpture garden.

We had several takeaways from our user testing process for P3. While we had initially played with the idea of bone conduction to create an immersive music experience, we saw that due to the nature of the vibration motors and the close contact they have with the wearers body, it would be better to focus on placing them on muscular regions for comfort. All the test subjects preferred the sensation of vibrating motors on the muscular parts of the back rather than on the bonier regions. We also found a slight difference in the locations which test subjects found pleasurable – since our male test subject did not enjoy the experience along the spine as much due to wider shoulders, as compared to our female test subjects.

The mid-lower back emerged as the location with the best sensations and this gave us useful insight about the placement of the motors in our jacket/ vest. Talking to our test subjects about the usability, we got several ideas about the form of our project – whether to keep it a hoodie or play with the idea of making it an undershirt. Since test subjects preferred the tighter fit, we did decide to keep the form factor, either a hoodie or undershirt, tighter so the motors can be closer to the body.

At this point, we are ready to proceed to a higher-fidelity prototype. This step was very valuable in understanding how our target users respond to the vibration sensations at various locations on their back. Now that we have gained information about the location and pressure of the motors, we will decide on a form factor. We expect that we will next create a more portable device. We will test this device (before P6) on a few individuals to address major usability problems or difficulties with sensation and fit. Because we’re constructing an experience, we are focused on testing sensation rather than task performance.