We have designed a jacket that connects to your iPod/other music-playing device to allow users to feel the low bass present in music wherever they are.

Task Descriptions – What we Chose to Support in this Working Prototype

Our working prototype supports the following tasks: first, we want our prototype to help users experience music without disturbing their neighbors at home. We call this task “easy,” since its primary requirement is proper transformation of bass to vibration. It doesn’t need to be portable, very quiet, or inconspicuous. Second, we want to enable users to experience/listen to music in a quiet environment (such as in a library, or on a public bus) without disturbing people around them. We would evaluate this as a “medium-level” task, as it requires us to incorporate a compact, relatively portable and inconspicuous design into our prototype. The third and last task, however, is for our users to be able to walk in public with this jacket while still receiving the full “concert sensation” experience. This task will be hardest, since the jacket must effectively replicate the desired sensation while being inconspicuous, quiet, and completely portable. If our jacket too obviously appeared to be of some value, this would pose a safety risk to the user who might become a target of crime. 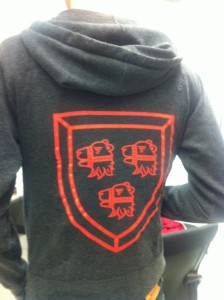 Discrete fit on the back. Cannot tell the motors are in there.

Did our Choice of Tasks Change from P3 and P4?

Our tasks did not change much as a result of P3/P4, since P3/P4 focused more on our efforts to see if we could properly replicate the sensation of low bass using vibrating motors. While our results from P4 influenced the design of our jacket, the results reinforced our ability to have our jacket fulfill the tasks we had already envisioned; we found the motors to be effective in replicating the feeling, and our system sound. We will describe in the next section how P4 influenced our design.

Perhaps the largest discovery we made as a result of our first iteration of prototyping was the importance of motor placement on creating sensation. We had earlier theorized that bone conductivity could be an asset in replicating the low bass sensation. Upon testing motor placement in P4 however, we discovered that users responded negatively to having the vibration right up against their bones. The focus of the motors, we saw, should be on more muscular regions of the body. This influenced our placement of the pockets containing motors in our jacket. 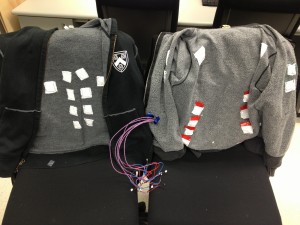 We also showed our participants in P4 and asked them about the likelihood of their using our system through the form factor of the hoodie jacket. Most participants responded that while they would consider wearing the jacket, they felt pleasurable sensations most when the motors were in as close contact with their body as possible. This would have to be achieved through some sort of undershirt or thinner material. We ultimately decided that we were comfortable with the jacket for this iteration of our prototype- the jacket we’ve used is made of relatively thin cotton, and since it will come complete with 12 motors we expect the sensation of twelve motors to be strong enough to compensate for thicker material (in P4, we only tested the sensation of three motors on the body). This jacket is also a tighter fit than the one we showed users in P4. 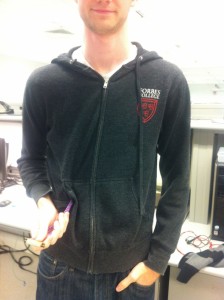 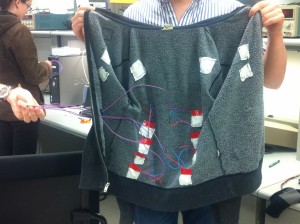 Motors are now on the inside, discretely placed at locations where sensations are most pleasurable on the back

The original design plan for this project was the analyze music using software. Two Arduinos were required for this task since we needed more timers for the application than could be provided by a single Arduino. The first Arduino would accept audio, using 64 samples taken over a window, the arduino would use a Fast Hartley Transform to determine the magnitude of all frequencies below 200 Hz (divided into 32 bins). The frequency bin and magnitude of the largest frequency would be sent to the second arduino which controls the motors. This process is repeated constantly as the audio plays.

It is important to note that the audio fed into the first Arduino would have to be passed through a low pass filter since higher frequencies would alias due to the low sampling frequency. This kind of problem would cause high frequency vocals or symbols to be interpreted as low bass.

This system works, however, the time necessary for the first arduino to obtain 64 samples and calculate a FHT would cause motor actuation to occur after a .21 second delay. Since this would cause a noticeable delay between hearing and feeling the music, it was important for this delay to be eliminated. Two options existed for us:

First, we could build a delay circuit which would delay audio by .21 seconds before it enters the headphones. This would require ordering of a particular chip and a number of accurately valued resistors and capacitors to tune this circuit.

The second option, which we chose was to build comparators after the low pass filter to replace the arduinos. This system would generate a digital signal from the bass tones above a certain threshold, therefore performing the same functionality of the arduino’s software in hardware. We chose this solution since it would in fact be cheaper and even produce a more desirable feel in the motors.

Overview and Discussion of our New Prototype

Our current iteration of our prototype has implemented the fundamental feature of our system- the actuation of vibrating motors to replicate the feeling of low bass in music. The circuit performing this function is implemented and stored inside of a box that allows the user to simply plug in their phone to experience the bass of whatever music they desire. We have discovered that this works well across a variety of devices (from Samsung Galaxy S3s to iPhone 5s). Once plugged in the user can still control regular sound volume on their headphones as before, but from a dedicated knob on the circuit (the voltage output from the device must remain constant).

Otherwise the system displays true “plug-and-play” functionality. Since no general microcontroller like an Arduino was required, our system will be even easier for the user to set up. The motors are likewise completely removable from the jacket- a desirable feature, since we want our jacket to be machine washable. 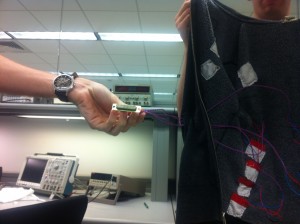 The connecter which plugs into the arduino which controls the motors

Technical aspects of the jacket aside, we also wanted to test if the jacket can be worn comfortably while the system is in use. Unfortunately, the box containing the circuit used to implement the audio signal filter is a bit bulky. For the purposes of prototyping, this can be held off to the side while a user tests the wearing of the jacket. In future iterations of the prototype (or in the jacket’s final form), we could order printed circuit boards so we can have a sleeker design, but that is infeasible and too permanent given the scope of our current prototyping phase. Otherwise, our prototype requires no “wizard of oz” techniques to simulate our systems function. With the frequency filtering implemented, and the motors connected to the jacket, the user should have access to all of the basic functionality we expect them to have at this stage of prototyping. 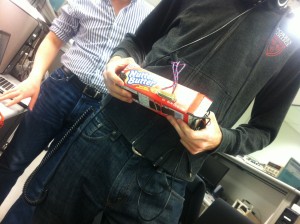 A close up of the vibrating Motors

Features not Included in this Prototype

One feature we did not implement in this prototype was the variation of sensation location on the body. We have considered the possibility that something like a lower bass frequency might feel more pleasurable on the lower part of the back while something higher might be felt on the upper part of the back. This would have to be confirmed in further user testing, and for this iteration we want the user to get the experience of this jacket at “full power” before beginning to vary the sensation by location on body. Therefore, we decided to leave off this feature.

1. Different Sensations on Different Parts of the Body 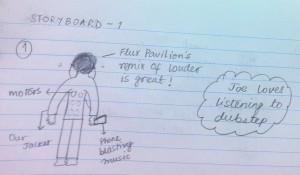 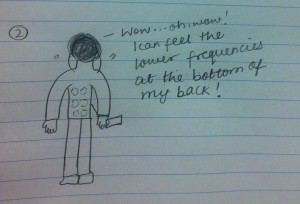 Low frequencies on the lower back 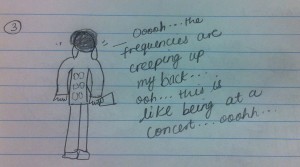 High frequencies on the higher back

2. A Phone Interface that Allows the Wearer to Control the Frequencies for their Own Comfort 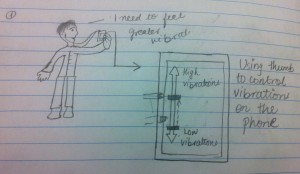 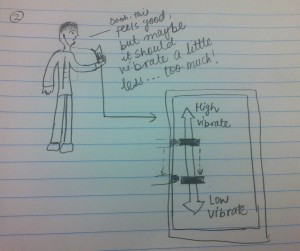 Can change the frequencies based on comfort and situations