Posted on July 26, 2012 by Rare Books and Special Collections

The 1912 U.S. pres­i­den­tial elec­tion was a turn­ing point for pro­gres­sivism, both for the nation and for Woodrow Wil­son.  An exhi­bi­tion now open at the Prince­ton Uni­ver­sity Library illus­trates this remark­able elec­tion and the life of the man who won it.

Drawn from the Uni­ver­sity Archives and the Pub­lic Pol­icy Col­lec­tion at the See­ley G. Mudd Man­u­script Library, the exhi­bi­tion fol­lows Wilson’s career as scholar, uni­ver­sity pres­i­dent, gov­er­nor of New Jer­sey, and newly elected pres­i­dent of the United States to tell the story of how his ideas were formed and changed in ser­vice of the nation. In addi­tion, the exhi­bi­tion fea­tures rare Wil­son mem­o­ra­bilia loaned by Anthony W. Atkiss, a mem­ber of Princeton’s class of 1961.

“The Elec­tion for Woodrow Wilson’s Amer­ica”  is free and open to the pub­lic, and is on dis­play in Fire­stone Library’s Mil­berg Gallery now through the end of Decem­ber 2012.  More information on the exhibit can be found on the Mudd blog. 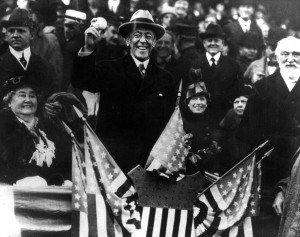 This entry was posted in Exhibition. Bookmark the permalink.