Posted on January 28, 2013 by Rare Books and Special Collections 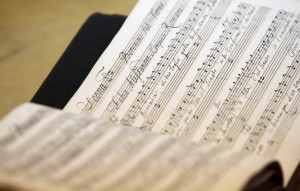 A detail shot of a manuscript for George Frideric Handel’s three-act opera Berenice at Firestone Library in Princeton on Friday, January 25, 2013. Andrew Miller/For The Times of Trenton

Princeton University Library is pleased to announce the acquisition of an eighteenth-century scribal score of George Frideric Handel’s three-act opera Berenice, copied by a contemporary Handel copyist (“S2”) from the composer’s autograph manuscript.   The acquisition is highlighted on the front page of the Times of Trenton in an article by Mark Spy:  Princeton University Library Scores Rare Copy of Handel Opera.

The manuscript and other related works will be on display in the Rare Books and Special Collections Main Gallery in Firestone Library during the 2013 American Handel Society Festival and Conference on February 21-24, 2013 and will be on display until March 4, 2013.  For more about the conference and festival, see: American Handel Society Festival 2013.

For more about the acquisition, see: Library Acquires an 18th Century Handel Score.