Posted on August 15, 2014 by Rare Books and Special Collections 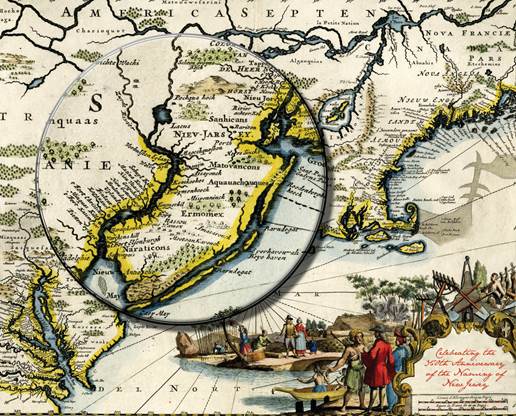 “Nova Caesarea: A Cartographic Record of the Garden State, 1666-1888” opens in the Main Gallery of Firestone Library, Princeton University, on Saturday, August 16. Commemorating the 350th anniversary (1664-2014) of the naming of New Jersey, this exhibition introduces viewers to the maps that charted the state’s development from unexplored colonial territory to the first scientifically surveyed state in the Union. Coastal charts, manuscript road maps, and early state maps provide a historical background to the major focus of the exhibition: the state’s first wall maps and county atlases. The large scale of these maps allowed mapmakers to include the names and locations of nineteenth-century farmers and merchants, hence personalizing local history.

Five landmark maps of New Jersey will appear together for the first time: Dutchman Pieter Goos’s 1666 nautical chart, the earliest printed map/chart of the territory that became New Jersey; Englishman William Faden’s 1777 map of “The Province of New Jersey, Divided into East and West, Commonly Called the Jerseys,” the most popular early map of the future state, which settled the boundary between New Jersey and New York; New Jersey cartographer William Watson’s 1812 map (one of three known institutional  copies), the first wall map of the state and the first to show all of its townships; Trenton surveyor Thomas Gordon’s 1828 wall map, the first large detailed and “official” state map; and the mammoth 1860 wall map of state geologist William Kitchell, compiled by Griffith Morgan Hopkins Jr., the largest map of New Jersey published in the nineteenth century, which attempted to show all the roads in the state.

Included in the exhibition are the first wall maps and atlases of a number of New Jersey counties, as well as two other cartographic rarities: the first wall map (1847) of the city of Newark (one of three known institutional copies) and Thomas Gordon’s “Map of Bergen Meadows” (1836), the first map of New Jersey’s Meadowlands (one of two known institutional copies). Accompanying many of the maps and atlases, for the purpose of historical comparison, are recent photographs of buildings and landscapes illustrated in them.

Early surveying guides and instruments provide an introduction to the methodology that led to the 1888 Atlas of New Jersey, the first published topographical survey of a U.S. state. Of particular interest is a mid-nineteenth-century surveyor’s wheel, or waywiser, which resembles a wheelbarrow. Using this tool, a surveyor could walk a route over a dirt road or field and easily measure the distance traveled. The revolutions of the large wheel turn dials in the wooden box that provide readings in feet, rods, furlongs, and miles. The circumference of the wheel is 8.25 feet; hence, two revolutions equal one rod (16.5 feet), forty rods make a furlong, and eight furlongs add up to one mile.

A substantial, heavily illustrated, and beautifully designed volume accompanies the exhibition and expands upon its cartographic subject (380 pp., full color, 11” x 14”). It is available in two editions. Copies of the regular pictorial hardcover edition ($100) include a large pocket map. The 350 copies of the special edition ($250), also containing the pocket map, have been signed and numbered by the author and designer; clothbound, each volume is housed in a custom slipcase with a separate folder of enlarged copies of the first wall maps of all New Jersey counties. Both editions can be purchased in the Special Collections office (end of gallery) during business hours; order forms are available in the gallery.

“Nova Caesarea” will run through January 25, 2015. Hours are Monday through Friday, 9:00 a.m. to 5:00 p.m.; Saturday and Sunday, noon to 5 p.m.; closed holidays. Exhibition tours with curator John Delaney will be offered at 3 p.m. on August 24, October 26, and December 14. The exhibition and its associated events are free and open to the public.

The “official” opening will take place on Sunday, October 5, with an illustrated talk by Dr. Maxine Lurie, professor emeritus, Seton Hall University, at 3 pm. in 101 McCormick Hall. And a substantial website is under development. Information on both of those developments will be forthcoming.