Posted on October 6, 2016 by Rare Books and Special Collections 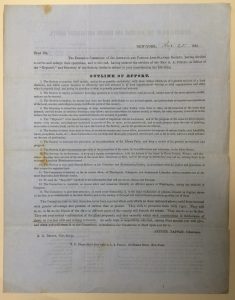 Consists mostly of correspondence along with some financial records, legal documents, such as deeds and land indentures, ephemera, and photographs dating from the 19th and early 20th centuries that relate to Chester W. Burton, a farmer from Chautauqua County, New York, and his family. Among other topics, the collection documents aspects of the Civil War and early settlement and gold mining in the west.

Consists of several anti-slavery letters and circulars, dating from 1838 to 1845, to New Hampshire state legislator and abolitionist, General Daniel Hoit (1778-1859).

Dating circa 1610, this manuscript contains various literary works, most of which are written in a single hand, that are primarily satirical in nature. It includes epigrams with titles such as “To a redhead,” “To a ladle,” a hunchback, a coward, a poor, a stutterer, etc.; a satire on Cardinal Du Perron; an allegory in 12 stanzas of 8 verses, entitled “Le temps qui parle aux Dames”; as well as several other poems. Also included are lines from Pierre de L’Estoile’s Registres journaux des règnes de Henri IV concerning Gabrielle d’Estrees, Duchess of Beaufort, though some of the text varies.

Consists of 19 letters from contemporary authors and friends of 19th century American poet and novelist George Parsons Lathrop, as well as one unrelated, unidentified letter. The letters to Lathrop (where dated) are from April 22, 1879 through March 17, 1893 and concern a myriad of personal and literary matters.

Consists of correspondence and a few related writings documenting the work of attorney James L. Stanton as Chief Pardon Clerk (1882-1884) and General Agent (1884-1885) under Attorney General Benjamin Harris Brewster in the United States Department of Justice during the administration of President Chester A. Arthur. Among the many cases and events the letters document are those surrounding the Star Routes scandal, which involved fraud by United States postal officials. Frequent correspondents include Benjamin Harris Brewster, Brewster Cameron, and William Haight.

Consists of fourteen letters (1941-1946) from American war correspondent, journalist, and novelist, Martha Gellhorn (1908-1998), largely written during the years she was married to Ernest Hemingway, addressed to George Brown (“Flash”), who was Gellhorn and Hemingway’s personal trainer, tennis partner, and friend. Written primarily from Finca Vigía, San Francisco de Paula, Cuba, and Sun Valley, Idaho, Gellhorn’s letters are intimate and often humorous in nature with regards to the couple’s physical condition and eating and drinking habits and paint a broad picture of Gellhorn and Hemingway’s domestic life together, recreation activities, and travels.

Consists of a collection of letters, accounts, land registers, and other documents from the office of Sir John Orde as governor of Dominica from 1783 to 1793, during a period of British colonial rule over the island; lists of enslaved workers on the estates of Peter Campbell, Esq., plantation owner in the parishes of Saint Elizabeth, Westmoreland, and Hanover, Jamaica, in 1817, 1820, 1823, and 1825; as well as some personal correspondence and documents of Sir John Orde, including letters to his wife and incoming letters during his naval service, household accounts, and various land and property documents.

Manuscript appraisal of the Elizabeth Anne plantation estate on Leguan Island in the Essequibo Islands-West Demerara region of colonial British Guiana (now the independent nation of Guyana), dated January 1st, 1818, assigning monetary value to the enslaved workers, land, buildings, and livestock owned by Robert Gordon, Esq., British colonial governor of Berbice from 1810 to 1814, as requested by his executors, Thomas Frankland and Alexander Fullerton, following his death.

Dating circa 1450-1475, this manuscript from Germany (Cologne) includes a narrative of the life of and prayers to St. Mary of Egypt.