a. Your group number and name

b. First names of everyone in your group

Our project is to make a device that could help with laundry room security.

We approached to people who were about to use the laundry machine in dormitory laundry room. We briefly explained them that we want to conduct usability test for our low-fi prototype and asked if they are interested. When they said yes, we gave them the printed consent form and asked them to read very carefully. We started our testing procedure when they signed to the form and we kept the form for records.

The first participant was a female sophomore. She was selected randomly by picking a random time (during peak laundry hours from 6-8pm) from a hat to check the laundry room in the basement of Clapp Hall. The student was using two machines to wash her impressive amount of laundry. She claimed to have waited until the previous user had claimed his clothes to use the second machine.

The second participant was a male sophomore. He was selected in a similarly random fashion using a drawn time within the heavy traffic time. The student was using one machine to wash his laundry, which he claimed was empty when he got there. This was strange, as the spare laundry bins were all full.

The third participant was a male freshman. He was selected in the same manner as the previous two subjects. The student was using one machine to dry his laundry, and claimed that he had no problems with people tampering with his things, although there was in fact someone waiting to use his machine.

The testing environment was set up in the public laundry room in the basement of Clapp Hall in Wilson College on Thursday, April 4th from 6-8pm, which we projected to be the peak time for laundry usage. The low-fi prototype components were set up in their respective places on one of the laundry machines– the processor was attached to the top, while the lock was fastened to the doors. Other equipment used consisted of the laundry machine itself. No laundry machines were harmed in the making of this test.

We first introduce ourselves to the participant and what we are trying to accomplish. After obtaining his/her informed consent and going through our demo script presented by Tae Jun, Dylan will give the system to the participant and explain the first task he/she has to perform for our test, using our first task script. The first task will be to load the laundry machine and lock it using our product. We then observe the user attempting task one. Upon completion, Peter then explains the second task. For the second task, the participant has to switch his/her role to that of the Next User trying to access the locked machine and send a message to the “Current User” of the machine. We all observe the participant attempting task two. Green will finish it up by explaining the last task to the participant, and we all again observe and take notes. The third and last task will involve the participant assuming the role of the Current User again and unlocking the laundry machine once their laundry is done. During all three tasks, we will rotate who is actually managing the changing of the screens of our product, so that we all get a chance to record notes on the different tasks. We then thank the user for his/her participation. 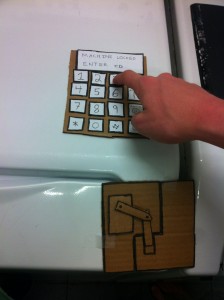 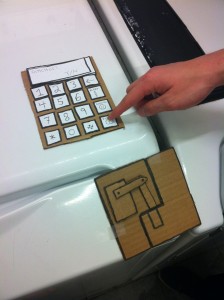 Overall, our results were quite positive. Users generally found no trouble in following the prompts, with the exception of a few minor things that they thought could be made more clear. The users often commented on the usefulness of the idea, citing their past negative experiences with people tampering with their laundry. They appreciated the simplicity of the keypad interface, as well as the “grace period” concept and other minor details explained to them. The only issues that came up (which we agreed to be Grade 3 Minor Usability Problems) were with the wordings of the prompts, which the participants would occasionally confirm with the tester.

The results of our tests were very encouraging. We found that our idea was very well received and that the users were very enthusiastic about seeing it implemented. Despite the minor kinks in wordage and syntax, our lcd output prompts elicited the correct responses from our users and got the job done. In fact, the users’ enthusiasm for a possible laundry solution well overcame any potential problems with a minor learning curve, as all users expressed this implicitly or explicitly at one point in their testing. That being said, the exact wording, order, or nature of the prompts can always be changed in our software. In this testing, we confirmed that our product has a strong demand, an adequately simple interface, and an anticipating audience.

We believe that we are prepared to begin construction of a higher-fidelity prototype. Our physical components and interface design seem to be adequately simple and readable to begin building, and any issues that presented themselves involved the lcd output prompts or commands, which can easily be refined at virtually any stage in development. Thus, we believe our next course of action will be to begin the assembly and configuration of our hardware components in higher fidelity.