Nova Caesarea & the 350th Anniversary of the Naming of New Jersey

Posted on December 6, 2013 by Rare Books and Special Collections 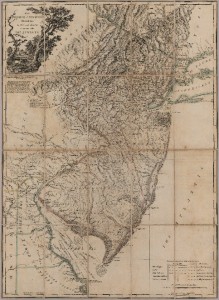 To commemorate the 350th anniversary (1664-2014) of the naming of New Jersey, Princeton University Library will publish Nova Caesarea: A Cartographic Record of the Garden State, 1666–1888 in the summer of 2014.  An order form with pre-publications discounts for both the trade and special edition is available HERE.  The deadline for pre-publication discounts is August 1, 2014. 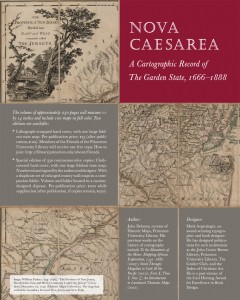 This comprehensive and extensively illustrated volume will introduce readers to the maps that charted the state’s development—from unexplored colonial territory to the first scientifically surveyed state in the Union. An introductory section on coastal charts, manuscript road maps, and early state maps will provide a historical background to the major focus of the book: the state’s first wall maps and county atlases. The large scale of these maps allowed their creators to include the names and locations of nineteenth-century merchants and farmers, hence personalizing local history. The maps will be supplemented with lithographs from the atlases and photographs of the locations today.

This entry was posted in Events, News and tagged maps, New Jersey. Bookmark the permalink.