Posted on February 19, 2014 by Rare Books and Special Collections 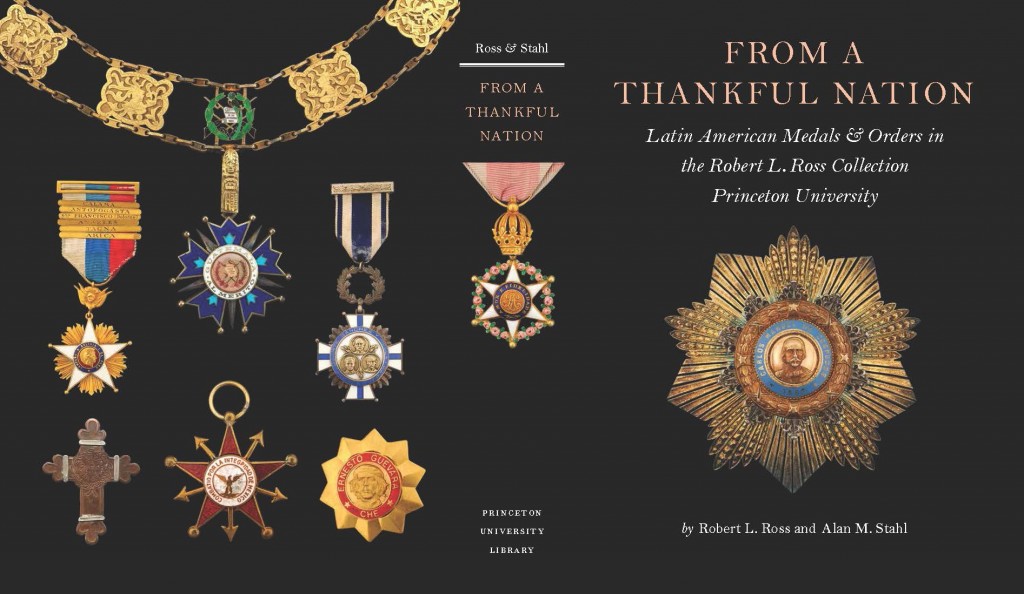 In celebration of the two-hundredth anniversary of Latin America’s wars of independence, the Princeton University Library has mounted a dramatic display of medals and orders that illustrate the recognitions awarded to soldiers and civilians in the form of wearable insignia. “From a Thankful Nation” opens on Friday, February 21, in the Main Exhibition Gallery of Firestone Library on the Princeton campus.

The exhibition features hundreds of Latin American decorations, ranging from a plain silver medal awarded to an officer of the Buenos Aires armed forces that freed Montevideo from Spanish colonial rule in 1814, to Guatemala’s highest award given to foreign presidents, the Collar of the Order of the Quetzal with its Mayan motifs, to a gilt example of the Cuban Order of Che Guevara, awarded for assistance to Latin America’s many left-wing movements of national liberation. Unlike the United States, which has generally avoided the award and wearing of medals as a vestige of European royal practice, the Spanish-, Portuguese-, and French-speaking nations of the New World have embraced such displays as tangible expressions of appreciation for the efforts of their soldiers and citizens. 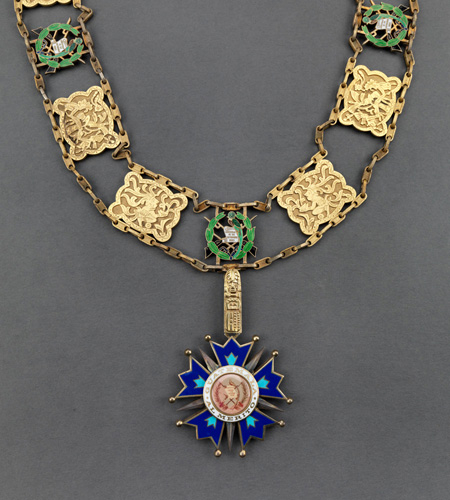 Guatemala Order of the Quetzal

Miguel Angel Centeno, Professor of Sociology and International Affairs and Chair of Princeton’s Department of Sociology, writes in his introduction to the exhibition catalogue, “These medals and orders allow us a unique perspective on the development of Latin American states and the qualities they have chosen to represent and reward.” On Sunday, April 13, at 3 p.m., Professor Centeno will give a public lecture on the ideals exemplified by the pieces in the exhibition. The lecture in McCormick Hall 101 will be preceded by a curatorial tour of the exhibition at 1:30 p.m. and followed by a reception in the Main Gallery. Additional curatorial tours will take place on Friday, February 28, and Thursday, May 29, at 3 p.m.

The exhibition is based on the collection assembled by Robert L. Ross, a retired investment banker who worked throughout his career to improve living standards in Latin America as the best way to promote democratic rule and civil society. Ross has donated his medals to the Princeton University Numismatic Collection for study, research, and teaching purposes in support of the University’s Program in Latin American Studies. This gift has made Princeton’s holdings the world’s most comprehensive collection of Latin American orders and medals.

“From a Thankful Nation” traces the development of Latin American medals from their origins in the emblems of medieval crusading knights and the Spanish, Portuguese, and French royal and imperial orders through the revolutionary battles and the building of republics throughout the region. The use of medals as part of the governing strategies of dictatorial caudillos and adventuring “filibusters” is illustrated by such pieces as the pearl-adorned example of the Grand Cross badge of the Juan Pablo Duarte Order of the Dominican Republic that the dictator Rafael Trujillo, as grand master of the order, awarded to himself. While tracing the awards to common soldiers and laborers, the exhibition is most eye-catching with the display of no fewer than ten examples of Collars, the highest grade of an order (usually reserved for heads of state), as well as seventy Grand Cross sets, most replete with brightly colored silk sashes enameled gilt badges, and breast stars.

The exhibition is accompanied by a full-color catalogue written by Ross and Princeton’s Curator of Numismatics, Alan Stahl. In 736 pages of text and with 969 color photographs, it sets all of the official medals of each country in their historical context. The catalogue is for sale from the Library for $125; inquiries should be directed to loliveir@princeton.edu. The exhibition is also documented in a fully illustrated website: http://rbsc.princeton.edu/thankful-nation/.

“From a Thankful Nation” runs from February 21 through August 3 and is open to the public without charge on weekdays from 9 a.m. to 5 p.m. and on Saturdays and Sundays from noon to 5 p.m. Further information is available from Princeton’s Curator of Numismatics, Alan Stahl, astahl@princeton.edu.