Posted on March 21, 2014 by Rare Books and Special Collections 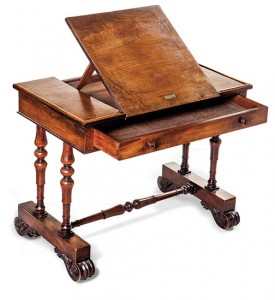 The Princeton University Library is pleased to announce that Peter N. Heydon, Princeton Class of 1962, has made several important gifts, which are now on view in Firestone Library’s Eighteenth-Century Window. The first is the slant-topped mahogany writing desk of British poet Elizabeth Barrett Browning (1806–61), on which she is known to have written her epic poem Aurora Leigh. In Browning’s “novel in verse,” she has a young Anglo-Italian woman tell her own story in blank verse: “Of writing many books there is no end; / And I who have written much in prose and verse / For others’ uses, will write now for mine.” Elizabeth penned Aurora Leigh in Florence, where she lived with poet and husband, Robert Browning (1812–89), from 1846 until her death fifteen years later. Her writing desk had been sent from England shortly after the Browning’s’ arrival and was in the Drawing Room of the Browning’s’ spacious Casa Guidi apartment, which they rented from 1847 on the second floor of the fifteenth-century Palazzo Guidi, Piazza San Felice, 8. The desk is depicted prominently, front and center, in an oil that Robert Browning commissioned from his friend, the Greek painter George Mignaty, the day after Elizabeth Barrett Browning’s death on July 1, 1861. Browning never returned to the Casa Guidi, so the painting was his remembrance of their happy and productive years in Florence.

Along with Elizabeth Barrett Browning’s writing desk, Heydon has also given Robert Browning’s Northern Italian walnut table, also depicted in the Mignaty painting, as well as the Browning’s’ silver-plated “traveling” tea kettle, made by Henry Wilkinson & Co., in Sheffield, England. These are the first of several anticipated gifts to Princeton from Heydon’s extensive collection of Browning first editions, manuscript letters, and other Victorian memorabilia collected over four decades by the donor.

English Department and Comparative Literature students will be able to view these three recently received objects together with other Browning items already in Princeton’s collections. Heydon’s association items were sold in 1913 by London-based auction house Sotheby, Wilkinson & Hodge, following the death of the Browning’s son and heir Robert Wiedeman Barrett “Pen” Browning (1849–1912). At the 1913 sale, British writer Florence L. Barclay (1862–1921) high-bid the writing desk, table, and tea kettle (along with many other personal treasures). Other Browning holdings in the Department of Rare Books and Special Collections include dozens of manuscripts and autograph letters, held in the Manuscripts Division, and an author’s proof for the second edition of Aurora Leigh (London: Chapman and Hall, 1857), incorporating handwritten emendations in Robert Browning’s hand as well as a manuscript note by Elizabeth Barrett Browning on the verso of title page (Robert Taylor Collection, Rare Books Division). These proofs served as setting copy for the first American edition of Aurora Leigh (New York: Francis & Co., 1857).

Peter N. Heydon first became enchanted with the poetry of Robert Browning as a Princeton undergraduate, while studying under English Professor Edward Dudley Hume Johnson. Heydon’s enthusiasm for the Victorians took him to The University of Michigan, earning both a MA (1963) and PhD (1970), studying with, among others, Professor Robert Super, Princeton Class of 1935. Heydon taught English Literature and Creative Writing at The University of Michigan between 1963 and 1986 on the faculties of both the English Department and Humanities Department. He is the founding President of The Browning Institute, Inc., based in New York and Florence, which acquired the Browning’s’ Casa Guidi apartment in 1971; and for fifteen years as the Institute’s President oversaw the fifteen-room restoration of the apartment as a Museum and study center. It is presently owned and operated, like the Keats-Shelley House in Rome, by Eton College and the British National Trust. Heydon has authored a number of pieces on Robert Browning and his circle for Browning Institute Studies; and he was co-editor with Philip Kelly of Elizabeth Barrett Browning’s Letters to Mrs. David Ogilvy, 1849–1861: With Recollections by Mrs. Ogilvy (New York: Quadrangle Press, 1973). He continues to reside in Ann Arbor with his wife of forty-five years, horsewoman and humaniac Rita Montgomery Heydon.

This entry was posted in Acquisitions, Exhibition, News. Bookmark the permalink.