Posted on February 13, 2018 by Rare Books and Special Collections 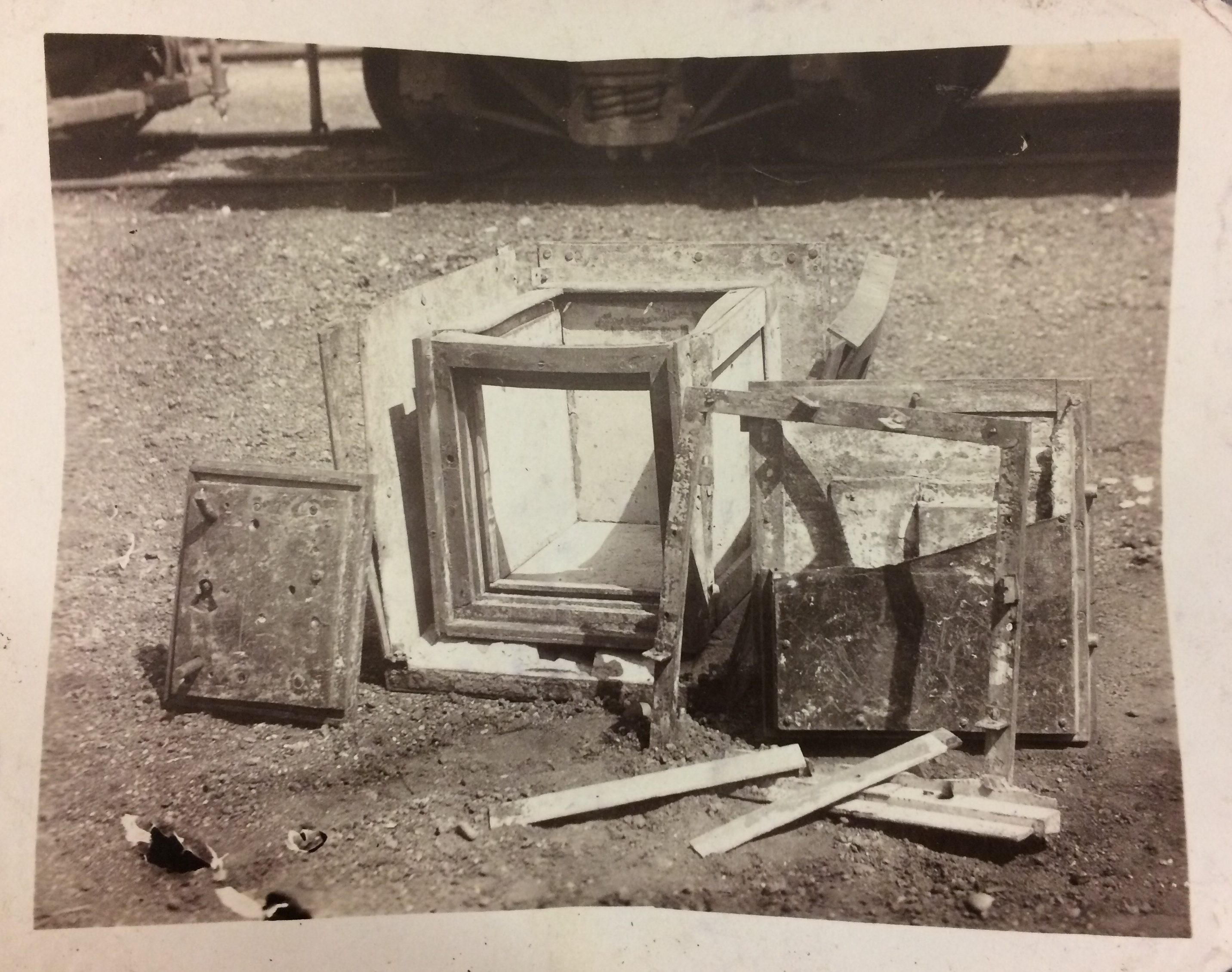 Photograph of an exploded safe from the express car of the North Coast Limited Train. George Laub album documenting an attempted train robbery at Bearmouth, Montana, 1905 (C0938 No. 746)

Consists of over sixty letters and related documents concerning the Estillac sugar plantation in the French colony of Saint-Domingue (now the Republic of Haiti) from the late 1750s through the early 1780s. Many of the letters are addressed to A. Mabille, a Paris-based hatter, trustee, and creditor, and pertain to the operations and troubled finances of the plantation under the management of Guillaume Claude Besson and Jean Guillaume Robillard.

Consists of a scrapbook album documenting an attempted train robbery at Bearmouth, Montana, on May 27, 1905. The album was compiled by Northern Pacific Railway expressman George H. Laub, who was hailed as a hero after he foiled Clarence B. Young’s attempt to rob the express car of the North Coast Limited Train after dynamiting the car.  Laub’s album provides a detailed account of the attempted heist, including photographs of the damaged express car and the exploded safe, congratulatory telegrams and letters, accounts of the hold-up, and newspaper clippings.

Consists primarily of correspondence with authors such as Gordon Lish, James Purdy, Cynthia Ozick, and Paul Bowles, among many others, along with some writings and publisher files of American literary critic and professor of literature Irving Malin (1934-2014).

Consists of sound recordings, a transcription, and editorial notes documenting an interview of American writer James Baldwin conducted by Alex Haley (1921-1992) and Jim Goode (James A. Goode, d. 1992) in late 1967 and early 1968 for Playboy but never published in the magazine. The interview is conversational and wide-ranging, with Baldwin responding to questions about his personal and artistic life, as well as about larger social issues surrounding racism, sexuality, politics, economics, and activism. Digital access copies of the recordings are available for access in the RBSC reading room.

Consists of papers of Simeon Johnson (1770-1807), an American merchant residing in Gonaïves, Haiti, following the Haitian Revolution, including a journal about the conflicts between rival Haitian leaders Henri Christophe (1767-1820) and Alexandre Pétion (1770-1818), as well as legal documents signed by Henri Christophe and Jean-Jacques Dessalines (1758-1806) and financial documents and correspondence pertaining to Johnson’s business and social affairs. This accession was separated from the Princeton University Library Collection on Slavery in the Americas (C1210), formerly known as the Miscellaneous Slavery Collection, during 2017 reprocessing and described as a separate collection.

Consists of a manuscript diary of Thomas Edwin Mills (1824-1887) describing his 1852 journey from Dunbarton, New Hampshire, to San Francisco, California, by way of Nicaragua, as well as his experiences as a gold miner in Marysville and Nevada City, California, during the California Gold Rush. The journal spans the period from January to November 1852, with more detailed entries documenting the months preceding and during his journey to California followed by sparser entries from his time as a gold miner, which indicate days he spent on his claim and amounts of gold mined. Mills traveled to California via Cornelius Vanderbilt’s Accessory Transit Company, which capitalized on the gold discoveries in California by transporting immigrants between New York City and San Francisco.

A recent addition to this open collection of the correspondence of English novelist and historian Sir Walter Besant (1836-1901) include seven letters from Besant (1836-1901) to various individuals, two of which are pasted inside volumes of Besant’s works, London and Reading in Rabelais. Also included are two images of Besant on ephemeral items.

A recent accrual to the papers of American novelist Susanna Moore includes additional correspondence from 2017, a notebook containing notes for her novel In the Cut, and a copy of Halekulani: A Gracious History (2004).

A recent accrual to the papers of American writer of fantasy literature, books for children and young adults, and nature books T. A. Barron includes additional international editions of his books, articles and speeches, and personal correspondence.

A recent addition to this open collection of manuscript material related to the print collections of Leonard L. Milberg (Princeton Class of 1953) is a press release from the Zionist Organization of America of “Plans of Justice Brandeis For Constructive Work in Palestine” (October 1920), likely the first printed appearance of Louis D. Brandeis’s full memorandum.

Revisions were made to the following finding aids:

Princeton University Library Collection on Slavery in the Americas (C1210)

Consists of an open collection of documents related to slavery, the slave trade, and the colonial plantation economy, particularly in the United States, the Caribbean, and Brazil in the 18th and 19th centuries. Description was enhanced throughout the finding aid, and materials that were not appropriately contextualized in a collection of slavery records were removed and placed into separate collections.