The personal and literary papers of the Nicaraguan-born Salvadoran writer Claribel Alegría were recently added to the Manuscripts Division‘s extensive collection of archives, correspondence, and manuscripts by 20th century Latin American and Caribbean authors and intellectuals. 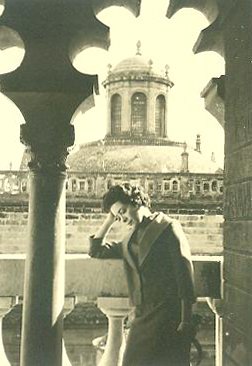 Claribel Alegría was born on May 12, 1924, in Estelí, Nicaragua, grew up in El Salvador, and moved to the United States in 1943. Shortly after her birth, her family was forced into political exile and sought refuge in El Salvador. Alegría attended finishing school in Hammond, Louisiana, and studied at George Washington University under the tutelage of Juan Ramón Jiménez. In 1947, she married Darwin J. (Bud) Flakoll, who became her life-long collaborator and translator. After graduating with a B.A. in 1948, Alegría published her first collection of poems, Anillo de silencio. Alegría and Flakoll moved frequently during the 1950s, traversing Latin America as a result of Flakoll’s position in the United States Foreign Service. During this period, Alegría brought out several poetry collections as well as an anthology of Latin American writing,New Voices of Hispanic America, that she co-edited with Flakoll. After settling in Paris with their four children (Maya, Karen, Patricia, and Erik), Alegría and Flakoll collaborated on a novel, Cenizas de Izalco, centering on the matanza, the 1932 massacre of 30,000 peasants in Izalco, El Salvador. This novel as well as her poetry mark her as a member of la Generación Comprometida (the Committed Generation), a literary movement of the 1950s and 1960s dedicated to social and political justice. In 1966, Alegría and Flakoll moved to Mallorca and continued writing poetry and novels. With the success of the Sandinista Revolution in 1979, Alegría and Flakoll returned to Nicaragua to document the experiences of those who took part. Her poetry came to reflect her developing political awareness as she responded to death squads, massacres, and the legacy of dictatorship and oppression. Alegría has continued her political and poetic engagement with Central America, dedicating herself to the struggle for human rights. The death of Bud Flakoll in 1995 inspired her poetry collection Saudade/Sorrow. She has written over forty books in such diverse genres as poetry, essays, novels, and short stories. She was awarded the Casa de las Américas Prize in 1978 and the 2006 Neustadt Prize for World Literature.

Please contact the Department of Rare Books and Special Collections, or Fernando Acosta-Rodríguez, Librarian for Latin American, Iberian and Latino Studies (facosta@princeton.edu) directly for additional information about this collection.