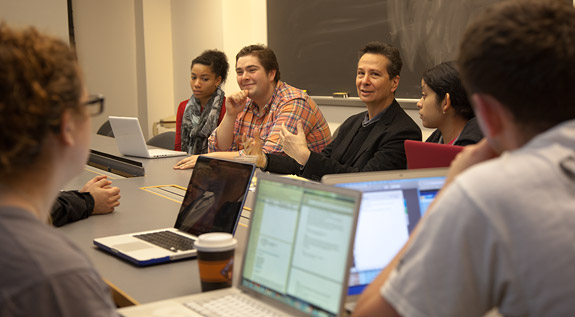 In discussing the differences in how various cultures deal with race, Telles often uses the United States as a point of reference for his students. In using a range of contexts, Telles is able to broaden the conversation about racial identity and race relations. Photo by John Jameson.

By spanning the social sciences and the Americas in his research, Professor Edward Telles has helped increase understanding of how race and inequality interact.

Telles, a professor of sociology and a PLAS associated faculty member, studies immigration, race relations and social demography, focusing on race and inequality across Latin America and on Mexican Americans’ assimilation in the United States. Before coming to Princeton, he worked on these issues for nearly 20 years at the University of California-Los Angeles and in the field in Latin America, primarily in Brazil.

I write to share some very sad news. Sarah Hirschman passed away earlier this week. There will be a memorial service this Saturday, 1/21, at 3:30pm at the Institute for Advanced Studies Dining Hall. You can read an article from Town Topics on Sarah listing her many contributions to the Princeton community; an introduction to one of her talks by Arcadio Díaz-Quiñones; and her obituary.