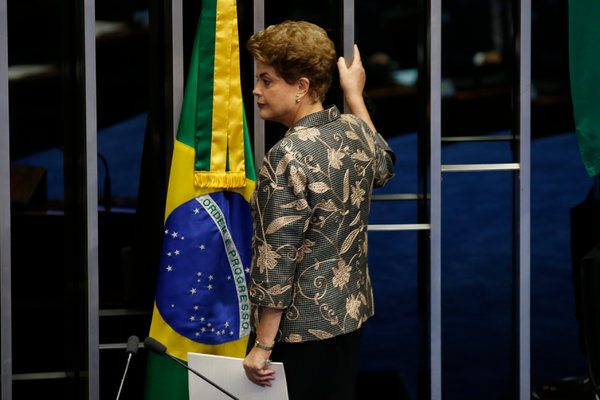 President Dilma Rousseff before testifying at the Senate on Monday during her impeachment trial in Brasília. Igo Estrela / Getty Images

BRASÍLIA — The Senate on Wednesday impeached Dilma Rousseff, Brazil’s first female president, and removed her from office for the rest of her term, the capstone of a power struggle that has consumed the nation for months and toppled one of the hemisphere’s most powerful political parties. Read more

This is a historic day for the people of Colombia.  With the finalizing of a peace agreement between Colombia and the Revolutionary Armed Forces of Colombia, the longest-running war in the Western Hemisphere is coming to an end.  We have witnessed, once again, that a sustained commitment to diplomacy and reconciliation can overcome even the most entrenched conflicts.

This accord is a tribute to the hard work and cooperation of countless Colombian leaders and citizens—across parties and administrations—who painstakingly laid the groundwork for this milestone.  I especially want to commend President Juan Manuel Santos for his courageous leadership during four years of difficult negotiations.  I likewise thank the government of Cuba for hosting these talks, its co-guarantor Norway, and the United States’ Special Envoy, Bernie Aronson, for his contributions to the peace process. Read more 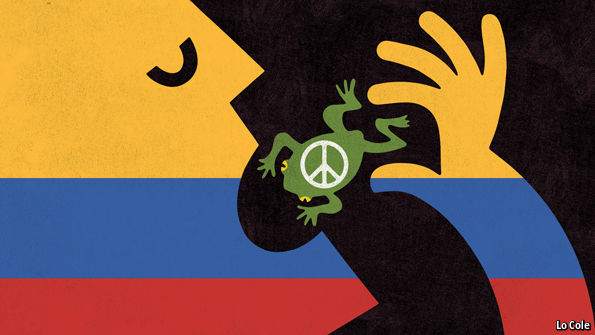 IT HAS been a long time coming. After 52 years of fighting, almost four years of peace negotiations and three months after a final deadline, the Colombian state and the Marxist guerrillas of the so-called Revolutionary Armed Forces of Colombia (FARC) have agreed to a bilateral and “definitive” ceasefire. That is cause for celebration, for Colombia and for the region. But the peace deal is controversial. Putting it into practice will be tricky and it may be made harder by the unpopularity of the government of Juan Manuel Santos, Colombia’s president.

On June 23rd Mr Santos was due to fly to Havana, the site of the talks, for a ceremony with the FARC’s leader, Rodrigo Londoño (aka “Timochenko”), in the presence of Ban Ki-moon, the UN secretary-general, and five Latin American presidents. In practice, the two sides all but stopped firing a year ago, when the FARC declared a unilateral ceasefire and the government halted offensive actions. But the government’s formal declaration of a ceasefire is historic. Read more 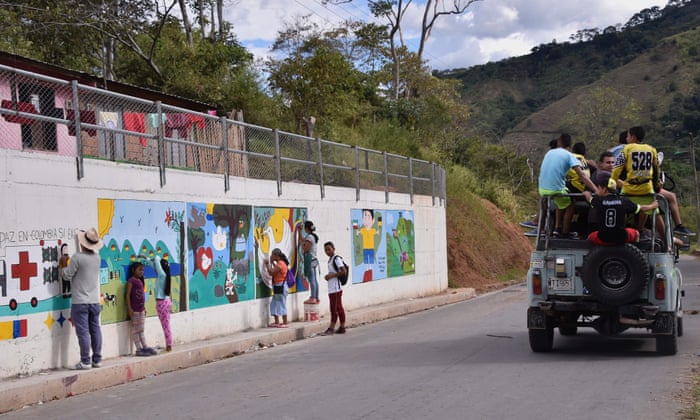 In a world where good news is often a rarity, the peace accord struck last week between Colombia’s government and the leaders of the country’s main Marxist rebel group, the Revolutionary Armed Forces of Colombia (Farc), stands out. The deal, four years in the making, brings to an end an era of often violent confrontation whose origins may be traced back to the peasant revolts of the 1960s. The Farc insurgency was rooted in a quest for social justice and land reform, issues that had dogged the country – sparking multiple uprisings between peasants and a landed elite – since its independence from Spain in 1891. Read more

The end of the conflict will mean the opening of a new chapter of our history. It means beginning a transition phase that may contribute to a greater integration of our territories, a greater social inclusion—especially of those who have lived at the margins of our development and have suffered the conflict—and strengthening our democracy so that it may be deployed in all of the national territory, and that it may assure that social conflicts are mediated through institutions, with full security guarantees for those who participate in politics. Read more Brazilian President Dilma Rousseff presents her final arguments Monday in the impeachment trial she is facing at the Senate in Brasilia. (Cadu Gomes/European Pressphoto Agency)

By Marina Lopes and Dom Phillips August 29
BRASILIA — A defiant Dilma Rousseff on Monday delivered what may be her last speech as president of Brazil, appealing to senators not to vote for her ouster in a controversial impeachment trial that was postponed until the Rio Olympics concluded.Rousseff began her Senate testimony with an emotional address, in which she spoke of the torture she suffered as a left-wing guerrilla imprisoned by a military dictatorship in the 1970s. She insisted that the attempt to remove her from office amounted to a coup that would only worsen Brazil’s political and economic crisis. Read more

This is a historic day for the people of Colombia.  With the finalizing of a peace agreement between Colombia and the Revolutionary Armed Forces of Colombia, the longest-running war in the Western Hemisphere is coming to an end.  We have witnessed, once again, that a sustained commitment to diplomacy and reconciliation can overcome even the most entrenched conflicts. Read more

The Met Fifth Avenue: Architectural Models from the Ancient Americas

From the first millennium B.C. until the arrival of Europeans in the 16th century, artists from the ancient Americas created small-scale architectural models to be placed in the tombs of important individuals. These works in stone, ceramic, wood, and metal range from highly abstracted, minimalist representations of temples and houses to elaborate architectural complexes populated with figures. Such miniature structures were critical components in funerary practice and beliefs about an afterlife, and they convey a rich sense of ancient ritual as well as the daily lives of the Aztecs, the Incas, and their predecessors. Read More

It was a Princeton moment more than 3,600 miles from FitzRandolph Gate: two Princetonians standing together outside the presidential palace in Lima, Peru, on July 28, wearing business suits adorned with sashes in the red and white of their nation’s flag. Read More