New York is a feast

Paris is a feast, and so is New York … well, not quite. I happened to be there on November 13 2015. By chance? Well, not quite. A few days later, I was due on the Princeton campus, to discuss Charlie, the attacks of January 7, and the issue of freedom of expression, which has become so burdensome lately. Charlie in Princeton, the home of Einstein and Oppenheimer: life is tragic, but it does grant you some pleasant surprises along the way. One of the strongholds of civilization had extended an invitation to a journalist on the staff of a small French satirical weekly, who had been shot at by people who abhor civilization. Six days before I was scheduled to speak, the attacks of November 13 brutally put freedom of expression in a different context. Up to that day, the professionals of respect – let’s call them the respectful prostitutes, after the title of Sartre’s play –  claimed to believe, or would have us believe, that all you had to do to stay out of trouble was to avoid making drawings of a certain prophet. That had all changed in the space of one blood-soaked evening.

This was my first major trip since January 7, and I felt like a princess attending her first ball after the spell that had turned her into a toad. I knew it would be exhausting, but when you’ve been wounded, you develop your own psychological weapons: anything you can do to beat pain, fatigue, fear or even sadness becomes a major victory, complete with its powerful wings. Of course there’s something missing, but like the famous statue in the Louvre, we do have those wings to make up for it. Whatever the result, every day, we prove ourselves, show a tiny bit of heroism.

Fortunately, I wouldn’t take the stage on my own: the format was a dialogue with Mario Vargas Llosa, author of many masterpieces, including Conversation in the Cathedral, which has recently been issued in a new translation by Gallimard. A selection of his novels is going to appear in two volumes in the Pléiade edition. When he is not teaching at Princeton, Vargas Llosa lives in Madrid. He has a new novel (coming out in April in France) entitled Cinco Esquinas, «the four corners», after a neighborhood of Lima where criminality is rife. He is 79 years old, and exudes serenity, good cheer and approachability. He never stops writing, and on top of his fiction, he publishes editorials in El Pais every week. Through writing, one’s weaknesses and doubts are magically transformed. Mario Vargas Llosa looks every inch the civilized and profoundly healthy man he is. He’s had to cope with the terrorist methods of the Shining Path, and the disgraceful way in which some people justified the massacre of whole villages. His stance drew a lot of criticism from the left. To share the stage with him was a huge comfort to me.

It was a full house in McCosh 50. Obviously, my role was to share what I and my friends went through on January 7. I hadn’t done that since the spring, because I have no intention of becoming a professional victim, a kind of parrot perched on the barrel of the Kalachnikov that was fired at me. I do not want people to see me as a victim for the rest of my life, but it would be just as futile to live as if this event, and its consequences, didn’t have a huge purchase on my future, didn’t force me to see it and think it through differently. Throughout the discussion, as well as during the dinner that followed, in a quiet, provincial venue with a timeless feel to it, I was grateful for the intelligent hospitality of my hosts. But between each mouthful, each repartee, my mind wandered back to the wounded people who were starting their long fight to survive, to live again. I would have liked to tell every single one of them that in the space of a mere eleven months, a mangled jaw, reconstructed after much surgery, could eat and talk and function adequately in spite of all the snags these activities involved.

During the discussion, the front page of several issues of Charlie was projected on the screen behind me, from a vintage Cabu in 2006 up to the most recent one by Coco, showing a man riddled with bullets whom my talented friend has transformed into a fountain of Youth and delight. I did my best to comment on them, although I had my doubts about the validity of comments and explanations: drawings either speak for themselves or they don’t. At the end of the Q&A, an American lady came up to me and said that it was simultaneously essential and nearly impossible to laugh at such atrocities. According to her, Coco’s effort to fight despair was palpable in the very lines of her drawing. Unfortunately, the fight for civilization can’t be summed up with a bottle of champagne, she concluded with a smile. We’re all agreed on that, I answered, but it’s a good start.

Below are some images taken at the November 19th PLAS Lecture entitled “The Charlie Hebdo Terrorist Attack: Freedom of Speech in the Age of Radicalism”.  The lecture featured a conversation between Mario Vargas Llosa, winner of the 2010 Nobel Prize in Literature and a visiting professor in PLAS and Philippe Lançon, a survivor of the Charlie Hebdo terrorist attacks, moderated by Rubén Gallo, Director of PLAS. 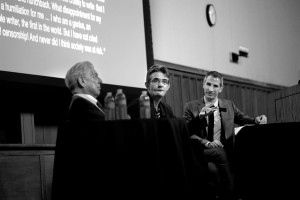 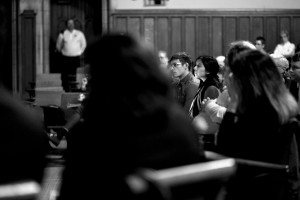 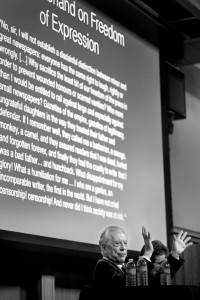 Videos of the “Listening and Seeing” conference organized by Pedro Meira Monteiro and Bruno Carvalho (Princeton University, Mar 6, 2015) are available for viewing here.

This spring, 12 Princeton undergraduates are joining forces in the interdisciplinary course “Environmental Challenges and Urban Solutions” to confront urbanization and environmental problems and to rethink traditional theories about nature and city dynamics.

Through the stories of D.B. Wilson, Big Floyd, Little Floyd and other residents, Fernández-Kelly said she has tried to shine a light on the lives of people in some of the poorest and most violent neighborhoods in America — lives often overlooked by society.

The Woodrow Wilson School of Public and International Affairs at Princeton University is pleased to announce its selection of the 2016 cohort of the Scholars in the Nation’s Service Initiative (SINSI) – read more here.