Posted on April 6, 2015 by Rare Books and Special Collections 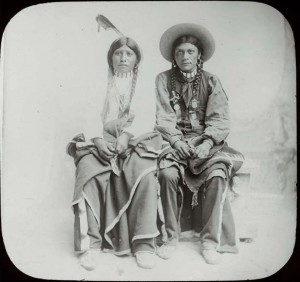 An open collection of more than 5,000 Western Americana photographs, consisting mostly of documentary photographs of the Trans-Mississippi West from the late 1860s to early 1900s. Subjects include Indians (especially studio portraits), natural wonders, cities, towns, buildings, and economic activities (mining, railroads, logging, and agriculture). Some photographs relate to the indigenous populations of Mexico and Central America. The dimensions, physical formats, and photographic processes of the photographs vary widely. Most of the photographs in this collection are available in the Princeton University Digital Library.

Anonymous Italian medical commonplace book, kept in Latin by one or more Italian medical practitioners, who lived in Tuscany, possibly in Florence, in the period 1580-1600. Comprised of individual entries for particular words or terms, each is written in majuscule, followed by a definition written in cursive. Entries were written over time in imperfect alphabetical order in sections that each begins with a capital letter, from “A” (“Asparagi”) to V (“Veneria”).

Prayers written almost entirely in the Upper Rhenish Dialect of German, with occasional Latin rubrics. Includes Pseudo-St. Bridget, of Sweden (approx. 1303-1373) “Fünfzehn Gebete zum Leiden Christi” (the “Fifteen Oes”), Marian Rosary, and other Marian prayers, indulgenced prayers, and instructions in German, many of which had been translated from Latin. Particular prayers are related to the confraternity of the rosary founded in Cologne (1475) by the Dominican Jakob Sprenger (d. 1495), and a prayer is to Philipp von Zell (d. ca. 750), venerated in the central Rhenish area. Also includes the “Pater Noster für die Toten” and other prayers for warding off a problematic death; as well as prayers of supplication to Christ.

Achilleas Antoniades (1947-) is a career diplomat who served as Ambassador for the Republic of Cyprus to the Czech Republic from 2007 to 2009. The files consist of his documents, notes, minutes of meetings, analytical reports, and maps, regarding the political situation in Cyprus from the late 1950s through 2009.

Series 7: 2015 Accession, 1941-2007, mostly documents Robert Goheen’s activities after his tenure as president of Princeton University. The series is mostly composed of what Goheen identified as both his personal and general correspondence, as well as correspondence and other records pertaining to Goheen’s leadership positions in various organizations. Some of the notable organizations include the American University of Beirut, Council on Foundations, and National Humanities Center. To a lesser extent, this series includes typescripts of some of Goheen’s speeches and scholarly papers, mainly related to Princeton anniversaries and memorials or to the topics of international affairs education, India, or nuclear proliferation. Goheen’s subject files are also included, which pertain to eulogies for various individuals or to Princeton and academia more broadly. Photographs of Goheen in this series mostly postdate his Princeton presidency, though there are a few taken before his tenure.