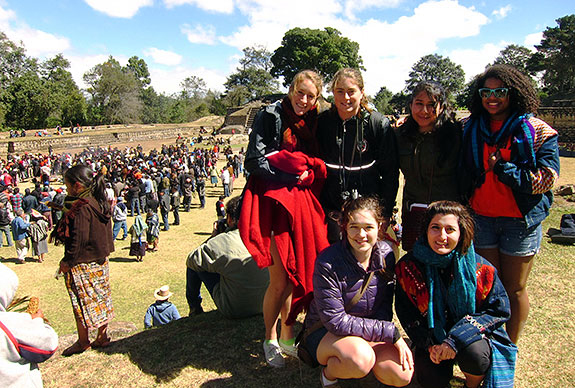 During December 2012 five Princeton undergraduate students enrolled in LAS 401 Latin American Studies: The Politics of Ethnicity in Latin America traveled to Guatemala.  This trip, led by Professor Timothy J. Smith (Visiting Research Scholar in PLAS and Visiting Assistant Professor in the Department of Anthropology and PLAS), was sponsored with the generous support of PLAS, the Department of Anthropology and the Fred Fox Fund.  Also accompanying the group was Christina Maida ‘14 who made a short film of the trip as part of her junior thesis. Below are reflections from two of the students who traveled with Professor Smith:
“I would like to extend great thanks for supporting the LAS 401 class trip to Guatemala in December.  It was an amazing week and was truly an invaluable addition to the work we did in the course this semester.  I am very appreciative of the opportunity we had to fulfill the latter half of our University’s informal motto, “In the Nation’s Service and in the Service of all Nations.” We were able to do more than sit in the classroom discussing places we have never been and people we have never met.  We were able to meet specific people who were mentioned in readings, visit the sites of ruins, learn the symbolism behind and distinctions between types of traditional dress, and practice our Spanish!…As a sociology major, I have learned about methodology in class and in discussions with advisors, but on this trip, we were able to actually witness and practice various elements of fieldwork….We learned more than just works written on pages and spoken in lectures.  Concepts, histories, social actions, and identities became real as we moved through the physical spaces we had studied.” – Briyana Davis ‘13
I’ve been told that over the years, memories of your college experience become blurred together, and only a few moments retain their vibrant immediacy.  The opportunity to travel to Guatemala this past winter, thanks to the events of PLAS, is one of those experiences that will remain with me long after I walk through the Fitz Randolph gates…Overall the trip was one of the most intellectually stimulating experiences I have had while at Princeton. – Flora Massah ‘13